President Obama has done more than any other President to support gay rights and to move gay rights forward. This is one of the reasons the administrations gets very upset when they perceive that he is taking an inordinate hit for simply not coming out and saying he supports gay marriage verbally. Many other politicians have received less scrutiny than this current president on this issue. Many other politicians have been allowed to play politics without receiving the acrimony our president is currently receiving. After-all it was President Clinton who compromised and passed codified hypocrisy in “Don’t Ask, Don’t Tell”. 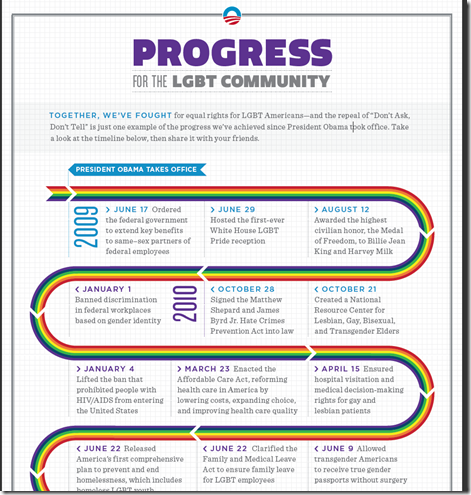 While all the above is true, I do think it is time for the President to categorically endorse marriage for all including same sex marriage. Most Americans are not stupid or one issue voters. If they are they were not voting for the president anyway. Most Americans know that any president that has done this much for the gay cause will ultimately come out in favor of gay marriage.

Everyday our President continues to say he is evolving on this issue he opens himself to the charge of waffling, a charge that we must reserve for Mitt Romney. It is well reported that the National Organization for Marriage (NOM) have been working on a strategy to use the gay issue to drive a wedge between blacks and gays, two of the president’s major constituencies. Our own local Harris County Democratic Party has been victim to this cancer causing wedge. Indecision on this issue will placate neither side. Early constructive engagement will.

We know the media will not let up. This issue will dominate leaving other very important issues like wealth and income disparity without coverage. Our Plutocrats would love that since if we are “fighting the gay issue” they are off the hook.

I love the following excerpted speech at the Human Rights Campaign dinner. I want our President to live up to the tone of that speech.

On a personal note:

I do not believe the marriage issue should have involved the government at all. Government should only sanction civil unions for governmental policy purposes. Marriage should be a church issue without any governmental involvement. This would be true separation of church and state.

As a Black Hispanic I straddle two cultures that are generally more homophobic than the population at large. I know these two demographics are in fact major supporters of the president. As such I can understand the president is concerned about the potential downside of verbally supporting what we know he supports intellectually. This is where I think he must use his educator in chief hat. It is incumbent upon him to articulate to these communities that just as they have known the pain of prejudice it is their responsibility to empathize with any other prejudiced community whether they quite understand said community or not, whether they agree with the values of that community or not.