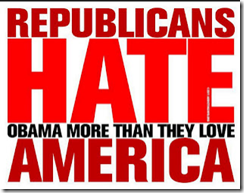 Mitt Romney’s convention speech had a lot of mistruths and distortions, but one of his central appeals to undecided voters was built on a fundamental lie. The truth is that since day one, President Obama’s political opponents — including Congressman Ryan — have been working to make him fail.

Republicans want Obama to fail more than they want America to succeed.

Obama does better when America does better, so Republican politicians have been sabotaging our recovery since day one. That’s like setting fire to the house, keeping your foot on the water hose, and telling everyone the firefighters did it. It’s the worst kind of politicians who keep voting against their own constituents’ interests — so their constituents will vote against the President.

On President Obama’s inauguration day in 2009, Republican leaders — including Romney’s VP pick Congressman Ryan — met to plot how they could sabotage and undermine the economy in order to make the President fail.

Republican leaders said they want the President to fail:

When asked about the potential for more job losses, Speaker John Boehner said, "so be it."

They threatened to shut down our government, which would have cost our economy billions.

They brought our nation to the brink of default by threatening not to pay America’s bills, and say they’ll do it again — even though the default crisis by itself almost derailed the recovery.

They didn’t even want the Federal Reserve to consider intervening to help our struggling economy.

Let’s remember — a month into his presidency, they refused to help our economy recover.

They unified in voting against the President’s American Jobs Act, which would create 2 million jobs, even though it’s based on proposals they have supported in the past.

If Republican politicians hadn’t pushed so hard to lay off our teachers, cops, and firefighters and block efforts to put Americans back to work fixing our roads and bridges, the unemployment rate could be down to 6% already.

And now, Republicans have nominated Mitt Romney for president, even though economic experts say that implementing all of his economic ideas would "push us deeper into recession and make the recovery slower."

Even Romney admits that massive spending cuts will “throw us into recession or depression" — but he supports them anyway.