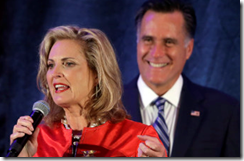 As reported by Reuters, Ann Romney’s says her biggest concern about Mitt Romney winning the presidency is his Mental Well-Being. I am sure Ann Romney was tired and that if she knew the implication of such an answer she would not have made it.

That said I think while tired and mentally vulnerable she was able to articulate what many see throughout this campaign. Mitt Romney is not a mentally strong person. Many talk about him not having a core. Many talk about him flip-flopping. He has even taken different positions several hours apart as he has done when supporting healthcare and excoriating it a few hours later. His current positions are diametrically opposed to what they were in his last political career.

As reported by Reuters

In an interview Thursday with television station KTVN, Mrs. Romney was asked what her biggest worry was should Mitt Romney be elected to serve in the White House.

"I think my biggest concern obviously would just be for his mental well-being," she said. "I have all the confidence in the world in his ability, in his decisiveness, in his leadership skills, in his understanding of the economy. … So for me I think it would just be the emotional part of it."

Ann Romney knows her husband best. It is likely this sentiment comes from what she has lived with.  Giving how quickly others are able to change Mitt Romney’s values and mind, this revelation should give Americans serious doubt about his fitness both mentally and  emotionally to be president.

We all know the cliché of the president having the finger on the button. We all know that a weak minded president can be made to do things he otherwise would not; like starting wars on false pretenses for ideological reasons or to maximize the portfolio of the military industrial complex.

Why is the mainstream media not covering this? If it were Michelle Obama making such a statement Fox News, CNN, ABC, CBS, and NBC would be all over it.  Everyone should be sending emails and tweets to these networks asking why it is they are not doing their job. Is this the Corporate Media instigating the semblance of a close election to steal one for the Plutocracy? Makes one wonder.