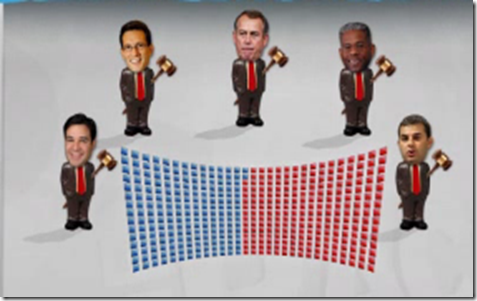 Michelle Bachmann tweeted the following on the first day of the 113th Congress.

At noon today, I introduced the first bill of the 113th Congress to repeal Obamacare in its entirety.

The 112th Congress was the least productive Congress in recent history. Rachel Maddows explains it best in the video below.

One would think with a record as bad as the 112th Republican Congress had, that they would attempt at atoning by starting with substantive issues that materially affect the American citizenry. One would think that with the lowest approval rating in memory that Republicans would start attempting to pass reality based bills.

With a debt ceiling debate looming, with an immigration debate looming, with a deficit reduction debate looming, why would a symbolic bill that this Congress does not have a prayer of getting passed be introduced? Is it that the attention span of the Right Wing Republican supporters of these extreme candidates requires continual stroking? Do they not understand that a Democratic Senate and Democratic President will never overturn Obamacare? Could it be that they simply do not understand constitutional constraints of checks and balances in our government that prevent said eventuality?

There is something special about Michelle Bachmann’s tweet. It shows that she is oblivious to the process of governing. Worst however is that Michelle Bachmann is the encapsulation of what the Republican Party has become. Specifically, Michelle makes it obvious that the Right Wing Tea Party faction of the Republican Party intends to keep business as usual. They believe government should do little and in their actions they are ensuring it does little.

When former Republican Presidential candidate Jon Huntsman said that the Republican Party was “Devoid of a Soul” he was correct. He however missed an important assertion; the silence from the sensible Republicans is deafening. Until they assert themselves as leaders and educate their followers to the intransigence of the Right Wing Tea Party faction, the party will die a slow death. Sadly in dying, they are doing material harm to the country.