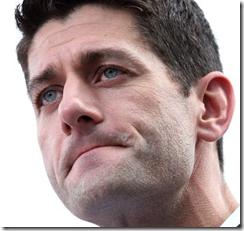 Republican Congressman Paul Ryan was rattled today on NBC Meet The Press when David Gregory showed the snippet from the President’s Inauguration speech, rebuking those that believe America is divided between makers and takers. David then showed a snippet where Ryan actually made the statement. Ryan visibly turned red and was immediately defensive implying the snippet was taken out of context.

Given that the 47% of “takers” include social security recipients and other important entitlements, Ryan was unable to identify specifically who he referred to as takers. If competent analysis is done on Ryan’s now third major budget proposal, he will likely lose all credibility and the reality of him simply being a Randian with no concern for the middle class, the takers, will become evident.

Paul Ryan went unchallenged when he articulated several categorical lies. He stated that it is proven fact that Keynesian economics was a failure. David Gregory allowed that lie to go unanswered when the fact is that the Great Depression ended with large deficit spending to build the World War II engine. That was Keynesian economics on steroids. The Reagan Recovery was built with tax cuts and spending increases that caused deficit spending. This is a backdoor Keynesian approach cloaked in tax cuts. Of course Bush’s approach failed because his policies allowed the pilfering of the middle class by rewarding a few, leaving the many with little disposable income necessary to grow an economy (the wealthy’ s marginal propensity to consume varies very little with tax rates and as such will not harm economic growth).

Jonathan Chait wrote a must read piece “Paul Ryan Breaks Down Under Wonkterrogation” that must be required reading on how easy it is to take down the Paul Ryan “Budget Fixing Numbers Man” mystique. Suffice it to say that Ezra Klein allowed him to hang himself by using his own words against him. One example is the talking point Ryan has been using when he states that in caving the Republicans have already offered revenues, and as such that is off the table. When reminded that in the debt deal debacle much more in spending cuts were already effected, he simply said, “that was last session”. It should be noted that his revenues were also last session.

In these debates both sides talk past each other. It is for different reasons. While Right Wing Republicans talk about cutting expenditures to bring down the debt, the debt is not their concern at all. Their concern is the effecting of minimal taxes and Randian selfish policies. Progressive Democrats want the deficits mitigated in order to continue the ability to have a healthy safety net. In effect the deficit is just a proxy fight used to promote ones ideological vision of America.

Make no mistake; the outcome of these debates will have a material effect on the middle class. The big lie is that the policies Ryan wants to put in effect will be pro-growth and somehow rebuild the middle class. All aspects of his proposals over the years do the exact opposite. Lack of guaranteed healthcare coverage inhibits entrepreneurs from stepping out on their own to innovate because of dependency on corporate healthcare. Increasing the retirement age means the young will have a harder time finding jobs and elderly will age painfully. One could go on and on. What his policies ensure is a continued decline in the quality of life of the middle class even as the wealthy get a bigger part of the pie.