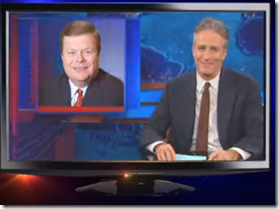 Currently the mainstream media are scolding the Obama administration for lack of access and for using other types of media (social media and local media) to get their information out directly. They insinuate the behavior is tantamount to state run media.

Maybe if the mainstream media behaved as Jon Stewart in the video below, the administration would be less reticent. It is refreshing to watch Stewart who realizes that inasmuch as he is a satirist, he should apologize and correct the record when he wrongly maligns someone.

What is telling is no one called the Jon Stewart show to ask him to correct the record. He did it out of duty. One can only hope that in the long run the mainstream media will be forced to act accordingly. They have yet to apologize for all the misinformation that they have put out from the buildup to the war in Iraq to the misinformation about the Affordable Care Act. They could learn a bit from Stewart.