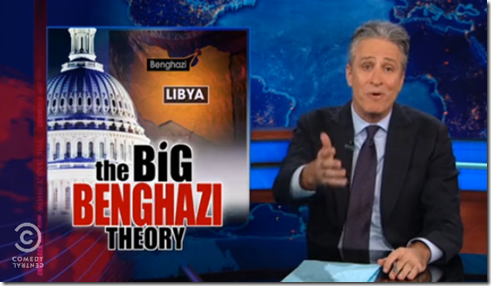 Fox News, the propaganda outlet of the Republican Party, continues to push the story that there was some sort of Benghazi cover up. They continue to a display false sense of indignation over the “Liberal Media’s” interest in covering the story. In the past, Fox News simply hyped a negative story on the administration and it  immediately became news on every network station. It seems that maybe the “Liberal Media” is being a bit more careful taking their lead from Fox News.

It should be said that there is no “Liberal Media'”. There is a spineless mainstream media that concentrates on entertainment as opposed to journalism. And then there is Fox News which is nothing but a Right Wing propaganda engine for the GOP that is used to destroy the opposition mostly with misinformation and lies.

Jon Stewart presents a montage of snippets that gives a picture of what Fox News viewers are bombarded with; conspiracies on Benghazi,  cover ups on Benghazi, and impeachable offenses by the President. Yet, no specific evidence after many months are provided.

Stewart plays a number on Congressman Darrell Issa by stating the fact that he voted against funds to support security for our foreign presence.He then presented a skit blaming Issa for the massacre given his vote.