Harris County Judge Ed Emmett has gotten Kingwood Area Democrat Karen Menke justifiably upset. She could not believe that he would keep a 1 cent property tax off the November ballot that bolster’s preschools. According to the Houston Chronicle,

Citing legal advice from a private lawyer, Harris County Judge Ed Emmett on Monday announced he would not place a 1-cent property tax on the November ballot to bolster preschools, despite thousands of signatures on a petition asking him to do so. [Source]

What is Ed Emmett afraid of? Why is he scared to have ‘we the people’ decide what we want to use our tax dollars for?

Apparently when his view that the petition drive was no longer in effect was determined by the county attorney to be incorrect, he hired his own lawyer to come up with another tactic to deny the voters the opportunity to decide. This has created another lawsuit that will cost the county. Wouldn’t it be better to let the people vote?

So much for fiscal responsibility. So much for leaving it in the hands of the voters. 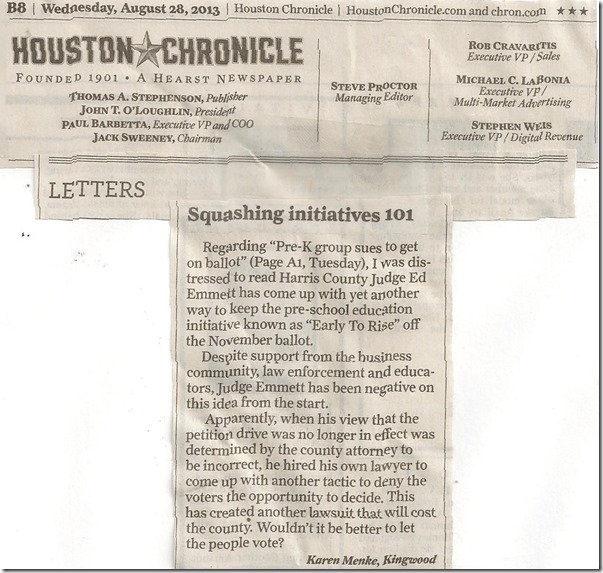