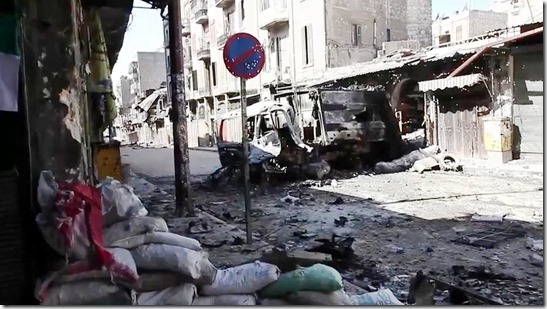 Even the most ardent Obama supporter likely believed that the President backed himself into a corner with his “red line” comment. But as ABC News Chris Good stated, “President Obama’s ‘red line’ on Syria isn’t quite as straightforward as it’s been made out to be.”

The President’s exact words were “We have been very clear to the Assad regime, but also to other players on the ground that a red line for us is we start seeing a whole bunch of chemical weapons moving around or being utilized, ” …“ That would change my calculus. That would change my equation.” The press along with most interpreted this to mean military action. The President did nothing to dissuade that belief. In fact he sent out John Kerry with an almost definitive statement that leads everyone to believe America was gearing up for a strike. In fact he even sent the navy in a poised position to attack. It was all a Bush-like action.

The Left-Wing blogosphere along with most war weary Americans went berserk. Suddenly, the President changed his stance and decided to have Congress vote on authorizing a strike while still reserving  his right to strike irrespective of Congress’ decision.

It seemed as if he was trying to convince Congress to give him the approval in earnest. But even as he tried to convince Congress that this would be a surgical and rather minimal strike, it ‘leaked’ that the strike plans were much more extensive than previously advertised. That would seem like a sabotage of a ‘yes vote’ in Congress domestically, while scaring the hell out of the Russians internationally. After-all, there would be a good chance that the Russians would lose their only naval base in the region.

After the President got back from Russia where the President had some talks with Putin, Secretary of State Kerry had a news conference where he let it ‘slip out’  that Syria could only avoid an attack if they gave up their chemical weapons. Russia gave support to that statement faster than bloggers even noticed it was a statement of consequence.

President Obama never wanted war if it could be avoided. This is the man that said the following in his speech against the Iraq War on Oct 2, 2002.

After Sept. 11, after witnessing the carnage and destruction, the dust and the tears, I supported this administration’s pledge to hunt down and root out those who would slaughter innocents in the name of intolerance, and I would willingly take up arms myself to prevent such tragedy from happening again. I don’t oppose all wars. And I know that in this crowd today, there is no shortage of patriots, or of patriotism.

What I am opposed to is the attempt by political hacks like Karl Rove to distract us from a rise in the uninsured, a rise in the poverty rate, a drop in the median income — to distract us from corporate scandals and a stock market that has just gone through the worst month since the Great Depression. That’s what I’m opposed to. A dumb war. A rash war. A war based not on reason but on passion, not on principle but on politics.

That said, the President needed all sides to believe that he could be as reckless as Bush was. In doing so the Russians were bound to use any opportunity or window to grab on to. Secretary of State Kerry gave them the necessary nugget.

From dire straits to possibility, was this all luck? For those who refuse to acknowledge the accomplishments of this President irrespective of the head winds from an intransigent and irresponsible Republican Congress, the answer is likely yes. Deep thinkers are likely to see this as a chess match and not simply luck in retrospect.

In one chess match the President was able to make the rank and file Republicans seem like doves, the neocons look reckless, the Tea Party wing seem like flip flopping buffoons all while potentially shutting down Syria’s use of chemical weapons without firing a shot or dropping a bomb. The Right Wing would have none of it. They are so filled with that disease, that mental disorder called hate that they would rather praise Putin as he ‘played Obama’.

Here is the reality; the only ones that weren’t played in this whole scheme were the President and his administration. This President is so self-assured that unlike many he is capable of taking a barrage  of incoming missiles without  responding. He keeps his eye on the ball. That is real leadership. One hopes that as he approaches the twilight months of his presidency, he will use this same technique for middle class centric issues, immigration issues, and other Plutocrat busting issues.