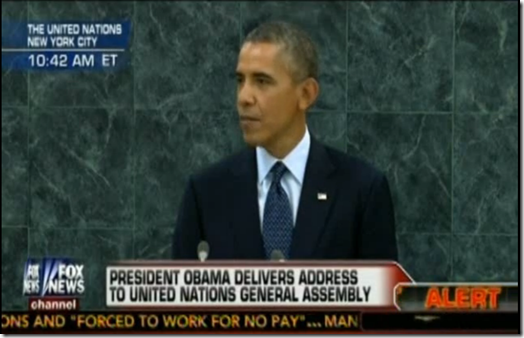 President Obama just completed his speech at the United Nations. It was a fairly long speech. The speech was very Middle East and Iranian centric.

Most of the speech was a regurgitation of policies those that follow politics and international issues would have found repetitive. That said the following snippet seemed to be a warning to the rest of the world, specifically to those that constantly accuse the United States of being an empire or meddling.

To summarize, the United States has a hard-earned humility when it comes to our ability to determine events inside other countries. Now, the notion of American empire may be useful propaganda, but it isn’t borne out by America’s current policy or by public opinion. Indeed, as recent debates within the United States over Syria clearly show.

The danger for the world is not an America that is too eager to immerse itself in the affairs of other countries, or to take on every problem in the region as its own. The danger for the world is, that the United States after a decade of war, rightly concerned about issues back home, aware of the hostility that our engagement in the region has engendered throughout the Muslim world, may disengage creating a vacuum of leadership that no other nation is ready to fill.

… I believe America must remain engaged for our own security, but I also believe the world is better for it. Some may disagree. But I believe America is exceptional. In part because we have shown a willingness through the sacrifice of blood and treasure to stand up not only for our own narrow self interest, but for the interest of all.

I must be honest though, we’re far more likely to invest our energy in those countries that want to work with us, that invest in their people instead of a corrupt few, that embrace a vision of society where everyone can contribute … nations that have persevered on a democratic path, have emerged more prosperous, more peaceful and more invested in upholding our common security and our common humanity.

The president in effect is warning the world that US citizens are bordering on being isolationist. He however believes in an America that must remain engaged fully internationally.

The hypocrisy that every informed listener is well aware of in the President’s statement is that currently Americans are fighting a losing battle in the land of plenty. This exceptional country has a Supreme Court that has given special rights to corporations, the powerful that have been progressively sucking the prosperity out of the many and transporting it to the few. This exceptional country that is willing to spill American blood generally spills it only when the interests of its Plutocracy are at stake.  This exceptional country is engaging in treaties like the Trans Pacific Partnership that does little to keep the country exceptional but just another pawn of an international wealthy few.

America is still exceptional in much. It is however on track to be so for not much longer unless its citizens remember that one must engage in its own body politic to maintain that which it holds dearly.