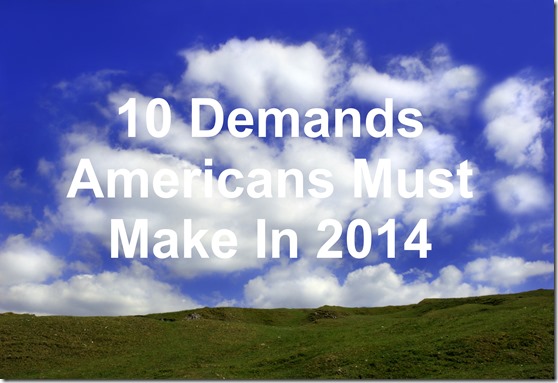 America is a strong country and has always been able to overcome adversity.  It has fought good wars, bad wars, bad economies, depressions, recessions, and natural disasters. It has always moved forward. America has always emerged better than it was before.

Over the last few decades however, America has been following a regressive path. That constant progress that created a solid middle class and access to success began to erode. Absolute power began to shift from the average American to corporate entities and moneyed interests. The Move to Amend documentary, Legalize Democracy, details the path America took towards progress and the path towards the corporate takeover.

Americans must demand these things.

The regression America has suffered over the last few decades need not be permanent. If every American is focused on the following 10 demands, the regression will stop.

1. Americans must demand a job with job security: There are many reasons why unemployment is high. Much of it has to do with the fiscal irresponsibility of a Republican Congress that promotes austerity, a proven failure. Americans must demand massive infrastructure spending to rebuild America’s dilapidated infrastructure. Immigration reform must be a part of this solution from a moral perspective and an economic perspective.

4. Americans must demand a tolerant nation: This may sound too aspirational but it is very important. The Plutocracy knows that eventually the average American will realize they’ve been had. Unfettered capitalism has sucked their wealth, innovation, and well-being. Intolerance is used as a distraction. Create wedge issues like abortion, same-sex marriage, war on Christmas, racial strife. A divided America then cannot fight against the real enemy. Government cannot heal the heart but individually one can see the virtue of being tolerant. Ensuring intolerant leaders that stoke intolerance don’t get elected is a must.

5. Americans must demand a responsible financial sector: Boom and bust cycles need not be catastrophic as it was in 2008. Most of the titans of finance who caused the substantial demise of the world’s economy turned out fine. It is the masses that continue to suffer from their recklessness and irresponsibility. Americans must demand Congress reinstate Glass–Steagall. Congress must put the chains on those thugs on Wall Street who care solely about making wealth. They care not for the country that gave them the wherewithal to be wealthy.

6. Americans must demand affordable credit: A vibrant economy like ours depends on affordable credit for everyone. The cost of borrowing on credit cards, pay day loans, and other forms of lending is predatory. It is effectively rich bankers profiting from those with the least. Many small creditworthy companies do not get good borrowing rates. These practices hurt many and limits their access to success. America’s dollar is backed by the full faith and credit of the United States. Why should a few bankers dictate its expansion? Americans must demand tight controls on lending and make it biased to the average responsible American citizen.

7. Americans must demand an Affordable education: Many states are using less of their tax dollars on education. They are able to save massive amounts in the short term by forcing college tuition to make up the difference. The rise in tuition price out many people from getting an education. For those that attend, it places a heavy credit burden on them. The problem is it takes a generation before the negative effects of this shortsightedness is realized. High skilled educated workers will have to be imported from other countries as the American worker is relegated to menial labor or unemployment. We must demand higher taxes on those that have benefitted on the backs of the poor and middle class to ensure all Americans who want a college education can get one. Everyone must have access to success.

8. Americans must demand secure affordable healthcare: A healthy nation is an innovative nation. The Affordable Care Act (Obamacare) is a start. It removes the shackles many had to an employer. It ensures that everyone has access to health insurance whether they had a pre-existing condition or not. Insurance can no longer dump you from a policy. There is no more fear of going out on your own and innovating, starting your own company. Americans must demand a single payer system that removes insurance companies’ big profits for simply taking your money to pay a bill. Americans must demand affordable medical schools so doctors can afford to be primary care physicians throughout the country.

9. Americans must demand a humane social safety net: Americans are not lazy. The economy is a manmade system. As such its failures are manmade. The least we could do is to have a humane safety net to catch all those who are temporarily unable to take care of themselves. With this comes social responsibility. Civics must be brought back into classrooms to teach all Americans the virtue of work and responsibility to our society at large.

These demands are not pie in the sky hopes. They are attainable in the short term. Back in 2010 I wrote my first book, As I See It: Class Warfare The Only Resort Ro Right Wing Doom. I reread it thinking that I would update it. What was very sad is that little has changed. No rewrite was necessary at this time. It is as applicable then as it is now.

To effect changes that will realize our hopes require that the right people are elected. It demands that you act. If you do so in the next election, the path to right the ship will begin.