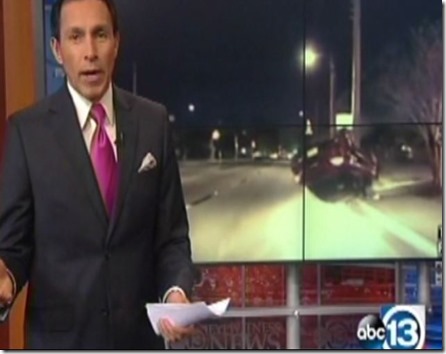 This is a graphic reason why one should never drive drive while texting. The driver had no situational or positional awareness. There was a police trooper behind him and he was oblivious because of his texting. That is the power of texting over ones other simultaneous activities.

The police officer was not quite sure why the driver was driving as he was. He followed him right up to the crash.

This can happen to anyone texting while driving.

“This person had no control,” the officer said.  “They went from driving in the left lane to crashing within seconds. …I can’t really imagine any other thing other than maybe like a medical incident. I mean that looked like someone maybe had like a heart attack behind the wheel and lost total control.”

Fort Myers, Florida police said that 23 year old Michael Woody admitted he was texting behind the wheel when officers caught him on video driving erratically and crashing. Michael Woody was unhurt. He immediately crawled out of the car seemingly in shock. He must know how lucky he was.