Jorge Ramos did not have kind words of neither the American news media in general nor Bill O’Reilly in particular. His challenge to the press is to be more transparent and hard-hitting irrespective of party. Jorge Ramos believes news media journalists should keep their distance from politicians.

Jorge Ramos even challenged Bill O’Relly on his own interviewing style. “You have your own biases,” Jorge Ramos said. “I mean, whenever you are covering Obamacare or Benghazi, you are supporting more the Republican Party than the Democratic Party.” 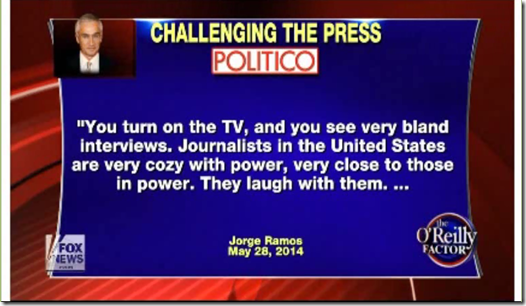 Every journalist should take heed to Jorge Ramos most important statement. “Basically more than irresponsible [the national press],” Jorge Ramos said. “What I would say is that they are not really professional. I think our mission is really a mission, Bill. I think it is to question those who are in power and I am not seen that. We have a great American tradition with Edward R. Morrow, Walter Cronkite, with the journalists of the Watergate investigation and I don’t see that. Sometimes when I go to Washington it feels like a club. They are more concerned about keeping their contacts than just getting the truth.”

And that is the rub. Much of the news media today put truth on the back burner. They are more concerned with contacts and access. They are all in one big club that most Americans are not a part of.