Paul Davis ahead of Sam Brownback in recent poll

Incumbent Red State Republican Governor Sam Brownback is in trouble. He is behind his Democratic challenger Paul Davis 41% vs 47% in the most recent poll. That result is outside the margin of error of the poll.

A few weeks ago I wrote a blog post where I stated the following.

Sam Brownback is in trouble because he got his wish and in getting his wish Kansans realized that tax cuts could materially affect them. The disproved Laffer Curve fantasies did not materialize.

“All of us standing here today know Kansas can do better,” said Davis. “We can have better schools and a stronger economy. The values that unite us as Kansans are much bigger than the partisanship and experiment of Sam Brownback. Through hard work and cooperation, we can restore Kansas together.”

“All of us are proud Republicans. We came together because of our common love of Kansas, our commitment to Kansas families, and our belief in moderate, commonsense leadership,” said Wint Winter, former state Senator from Douglas County. “We are deeply concerned by the direction Sam Brownback is taking Kansas. Today we announce our opposition to his re-election. And to pledge our voices, our energy and our votes to Paul Davis and Jill Docking – our choice for Governor and Lieutenant Governor of Kansas.”

Republicans for Kansas pointed to Brownback’s experimental tax plan, severe cuts to schools, and fiscally irresponsible budgeting as reasons for their historic decision. They also praised Davis’s moderate, commonsense leadership and his focus on proven solutions.

“We support Paul Davis and Jill Docking for many reasons, the first of which is their steadfast support for our public schools. Paul has been a champion of schools for his entire career,” said Carol Rupe Linnens, former member of the Kansas State Board of Education. “One of the unique values most Kansans share is a strong commitment to our schools and our top-notch education system. It is clear Sam Brownback does not share this Kansas value.”

Both the New York Times and The Cook Report now rate this race in this Red State as a toss-up. The pendulum just may be on the way back. 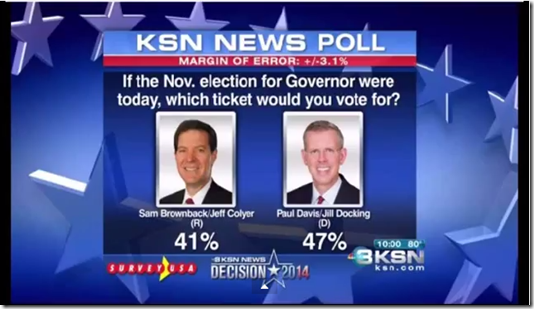