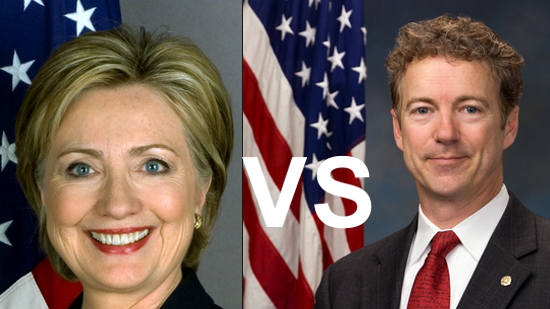 Events follow the norm until they don’t. Democrats can continue to disregard Rand Paul at their peril. When Rand Paul begins to sound like Liberal Detroit activist Maureen Taylor, Democrats must take heed. Rand Paul wrote a Time op-ed titled “We Must Demilitarize the Police.” He wrote,

When you couple this militarization of law enforcement with an erosion of civil liberties and due process that allows the police to become judge and jury—national security letters, no-knock searches, broad general warrants, pre-conviction forfeiture—we begin to have a very serious problem on our hands.

This is part of the anguish we are seeing in the tragic events outside of St. Louis, Missouri. It is what the citizens of Ferguson feel when there is an unfortunate and heartbreaking shooting like the incident with Michael Brown.

Anyone who thinks that race does not still, even if inadvertently, skew the application of criminal justice in this country is just not paying close enough attention. Our prisons are full of black and brown men and women who are serving inappropriately long and harsh sentences for non-violent mistakes in their youth.

In those few paragraphs Rand Paul is taking a chip out of the Obama coalition with a perceived acknowledgment of a racial issue many Democrats do nothing about. At the same time he keeps his base by framing it as an overreaching government. He is doing this with many other issues with different sections of the Obama coalition.

A few months ago I wrote two articles. The first, “Is Hillary Clinton the president we need at this time?” examined some of the potential problems she would have as the Democratic nominee. In that piece I explained how she could be triangulated by a populist Republican.

Many had assumed that I was referring to Rand Paul at that time. I had him among many in mind. A few weeks later I wrote “Don’t laugh, but Rand Paul could be our next president.” Many laughed and assumed anyone that believed Rand Paul could win the presidency was naïve or simply did not understand his past utterances on civil rights, his past associations, and past faux paus. That is not the case.

Anyone who reads Daily Kos and other liberal and progressive blogs cannot be fooled by Rand Paul—he's a true Republican Libertarian with a touch of "Dixiecratocracy." The problem is that most voting Americans are not the well-informed, and most members of the traditional media are lazy or programmed to misinform by the plutocracy.

The biggest fear is that if there is a coronation of a select few, many potential candidates will remain undeveloped. Worse is the inability to recover from an unknown. The fact that Ronald Reagan and George Bush were elected presidents of the United States means it is not all that farfetched to wake up and discover that Rand Paul could be our next president.

This week I wrote the piece titled “Hillary Clinton's Atlantic interview may be fatal to her chances for the presidency.” A few saw the title as a hyperbole. While today it probably is a hyperbole soon it may not be. In her interview Hillary Clinton displayed very little nuance on Israel or terrorisms. In effect she sounded like a neocon lite. She also adopted a Republican talking point on the economy without voicing the reality of Republican policies stagnating the U.S. economy.

With all his faults President Obama won over 50% of the vote for his election and reelection. He passed a healthcare bill that has eluded presidents for nearly a century. He has changed our foreign policy from brute force to a game of chess (sometimes even good chess players make bad moves). And he has kept the country viable throughout Republican intransigency, sabotage by certain corporations, and a corrupt Supreme Court. Hillary Clinton should remember that if Al Gore had run on Bill Clinton’s record, the Supreme Court would not have had the chance to appoint George W Bush president. Running from her record with President Obama is not a winning strategy.

In a polarized nation Republicans do not vote for Democrats. There is no point in tailoring a message to attempt to appease them. Americans want a leader that they believe speak to their economic problems and yes, their safety via a non-interventionist international policy. They want to know their new leader will be focused on their problems. That is why they elected and re-elected President Obama. If Hillary Clinton is to win, she must not come across as she did in the Atlantic interview. Hillary Clinton can only win with the Obama coalition.