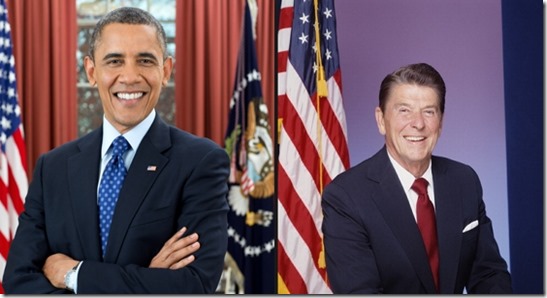 There is an article out at Forbes that I had to reread and process before feeling confident enough to blog it. After looking at the numbers myself from The Bureau of Labor and Statistics (BLS), I figured it was my responsibility to help get this story out. After-all, the traditional mainstream media seem to be designed to deliver GOP talking points on this President, misinform, but mostly stay quiet on his accomplishments.

Here are the highlights of the Forbes article “Obama Outperforms Reagan On Jobs, Growth And Investing”.

If one listens to the traditional news media, one would see that they spin the unemployment numbers as if President Obama’s recovery is more anemic than the recovery of other presidents. The last President that had to dig America out of the type of hole that greeted President Obama was FDR. And we know it took a world war to to get us out of that depression after fighting with it for nearly a decade. 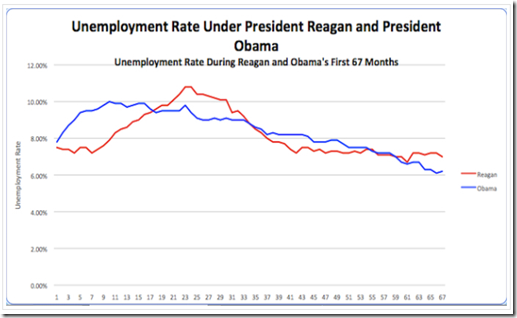 Bob Deitrick: ”President Reagan has long been considered the best modern economic President.  So we compared his performance dealing with the oil-induced recession of the 1980s with that of President Obama and his performance during this ‘Great Recession.’

The chart below also blows away at the myth about the labor participation rate being somehow out of whack with the past. The chart below shows that the difference between total unemployment and reported unemployment has been consistent since 1994. Why was that not reported? One president cannot fix a systemic problem in an economy where said problem had been true for two decades. 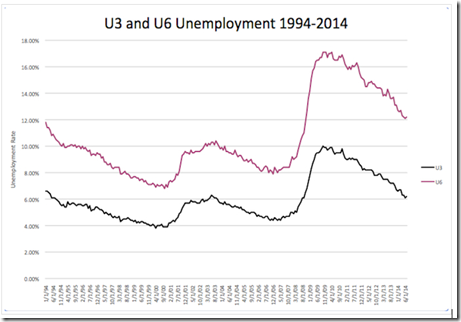 Deitrick: “The labor participation rate adds in jobless part time workers and those in marginal work situations with those seeking full time work.  This is not a “hidden” unemployment.  It is a measure tracked since 1900 and called ‘U6.’ today by the BLS.

“As this chart shows, the difference between reported unemployment and all unemployment – including those on the fringe of the workforce – has remained pretty constant since 1994.

But here is the kicker. When talking about the labor participation rate, talking heads on TV always fail to mention that while baby boomers were entering the workforce during Reagan, they are leaving during Obama. In other words because of the size of the baby boomer generation, unless immigration and birthrates augment the younger populations, there is a bias to a lower labor participation rate. Reagan had the benefit of the boomers and still failed to outperform this President. 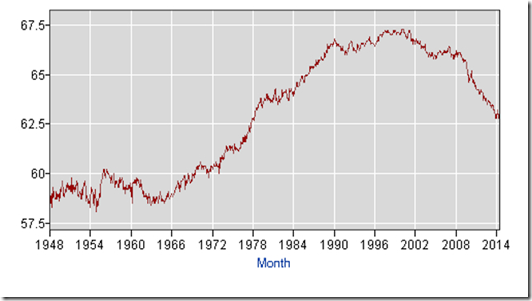 “Labor participation is affected much less by short-term job creation, and much more by long-term demographic trends. As this chart from the BLS shows, as the Baby Boomers entered the workforce and societal acceptance of women working changed, labor participation grew.

“Now that ‘Boomers’ are retiring we are seeing the percentage of those seeking employment decline.  This has nothing to do with job availability, and everything to do with a highly predictable aging demographic.

“What’s now clear is that the Obama administration policies have outperformed the Reagan administration policies for job creation and unemployment reduction.  Even though Reagan had the benefit of a growing Boomer class to ignite economic growth, while Obama has been forced to deal with a retiring workforce developing special needs. During the eight years preceding Obama there was a net reduction in jobs in America.  We now are rapidly moving toward higher, sustainable jobs growth.”

Even with the systemic reality of baby boomers causing a reduction in the labor participation rates, a dysfunctional Congress that has done very little since this President’s first two years under a Democratic Congress, and the deliberate sabotage by Republicans, this President has outperformed economically. The author of the piece says it best.

Economically, President Obama’s administration has outperformed President Reagan’s in all commonly watched categories.  Simultaneously the current administration has reduced the deficit, which skyrocketed under Reagan.  Additionally, Obama has reduced federal employment, which grew under Reagan (especially when including military personnel,) and truly delivered a “smaller government.”  Additionally, the current administration has kept inflation low, even during extreme international upheaval, failure of foreign economies (Greece) and a dramatic slowdown in the European economy.

There is much angst that most Americans feel. The President has restored the economy. He has added some economic security with the Affordable Care Act (Obamacare), Lilly Ledbetter Fair Pay Act of 2009, and some other programs along the fringes. What President Obama has been unable to achieve is revamping an economic and tax system that is biased against middle class America. This will require average Americans that are ready to assert their worth and demand its piece of the American pie.It will  require an America that does not fall for the false economic narrative that states that the rich are the job creators. Americans must no longer allow the plutocrats to steal our treasure.