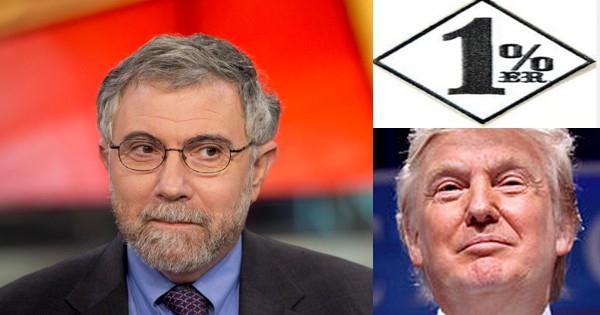 Paul Krugman wrote an interest piece titled “Republicans Against Retirement” in the New York Times today. Do not be fooled by the title. It has more to do with the Republican Primary than with retirement.

The first paragraph lays out the Republican dilemma.

Something strange is happening in the Republican primary — something strange, that is, besides the Trump phenomenon. For some reason, just about all the leading candidates other than The Donald have taken a deeply unpopular position, a known political loser, on a major domestic policy issue. And it’s interesting to ask why.

The issue is Social Security. Most GOP candidates want to modify it with the outright intent to kill it into privatization. George W. Bush tried it after the 2004 election claiming he had earned the political capital to ‘reform’ Social Security. Of course it was a loser and Republicans ran away as fast as they could from touching Social Security.

So what is Donald Trump’s position? He wants to save and expand it.

The question becomes – why would most Republican candidates take on the losing position of destroying Social Security as we know it? Paul Krugman answers that.

The answer, I’d suggest, is that it’s all about the big money.

Wealthy individuals have long played a disproportionate role in politics, but we’ve never seen anything like what’s happening now: domination of campaign finance, especially on the Republican side, by a tiny group of immensely wealthy donors. Indeed, more than half the funds raised by Republican candidates through June came from just 130 families.

And while most Americans love Social Security, the wealthy don’t. Two years ago a pioneering study of the policy preferences of the very wealthy found many contrasts with the views of the general public; as you might expect, the rich are politically different from you and me. But nowhere are they as different as they are on the matter of Social Security. By a very wide margin, ordinary Americans want to see Social Security expanded. But by an even wider margin, Americans in the top 1 percent want to see it cut. And guess whose preferences are prevailing among Republican candidates.

To most Donald Trump is a caricature. However the media has the ability to make a caricature into a contender. One must not forget that the demise of the middle-class began with an actor, Ronald Reagan. He was a  caricature backed by an ideology that has inflicted unmeasurable damage to the middle-class. Soon after, George W. Bush, another caricature,  another bastion of incompetence, used two wars and tax cuts to transfer America’s treasure to a wealthy few.

Chuck Todd interviewed Donald Trump recently. The intent to provide legitimacy to Donald Trump was evident. All bases are covered in case Trump breaks through. That Fox News took Donald Trump’s side in the spat he had with Megan Kelly is also probative.

It turns out the one percenters may turn over the 2016 election to a one percenter. Either way, they win. That is why a grassroots political revolution is necessary to get a real middle-class populist elected.