Is Lawrence Lessig the most presumptuous potential presidential candidate? 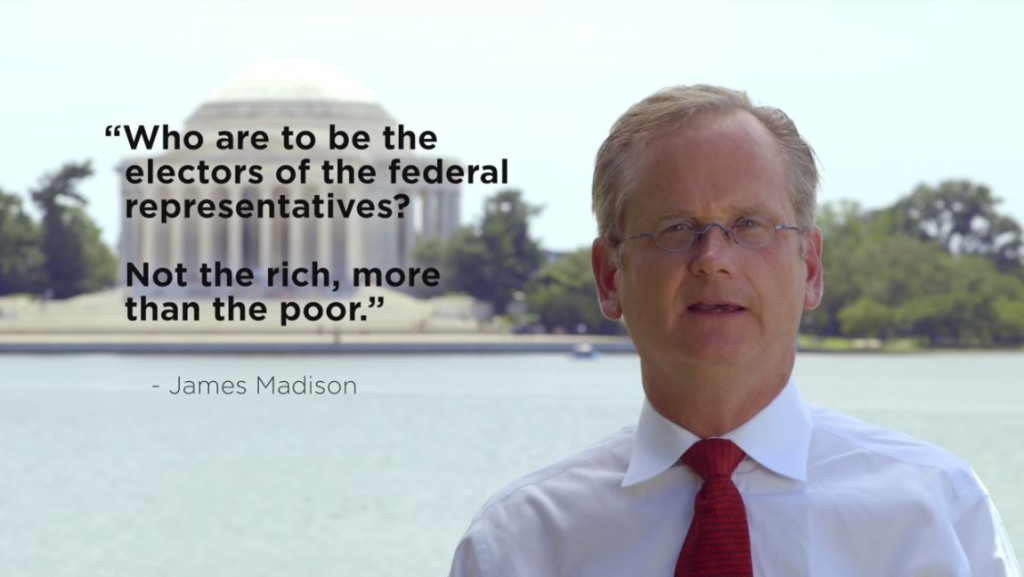 Bernie Sanders stands for something. He stands for something big. He has ignited an incredible movement -- stronger and more committed at this point than Barack Obama had in 2007. He has given America a vision of how they can get America back. Some doubt he could win. I don't doubt that.

I doubt he could govern. Not because he's weak. He is not. Not because he's inexperienced. He has more experience in Washington than anyone running. Bernie Sanders could not govern because Elizabeth Warren is right: the most powerful in America have captured America's government. The most powerful own DC. And until we change that, nothing -- certainly none of the bold ideas that Bernie Sanders is selling -- will happen.

Lawrence Lessig claims that Bernie Sanders has given no credible answer on how to take the government back. He gives the standard elitist dismissal of Sanders call for a revolution.

Bernie has given us no credible answer to that critical question. Not one. He talks about a "revolution." But seriously, what is that rhetoric describing? Do we really imagine millions of people occupying Washington? Will we be camping out on the Capitol Lawn in January?

Lawrence Lessig continues in an essay much too long because of platitudes to illustrate that it is not we who are not thinking big enough. He believes America is not too concerned about wealth disparity. He thinks America is agnostic to European style social democracies.

The problem is that ivory tower activists do not understand Americans. They do not understand democracy. The democracy they generally seek is just the mirror image of what we have now. It is the effecting of the thoughts and desires of a new set of elitists. The  reign of different masters.

Here is the reality. Money in politics is a problem. It is a problem because it has the ability to foment false realities and misinformation through a corporate media that ultimately indoctrinates many to vote against their own interest. Additionally it has the ability to create a pseudo pay for play modal in the court system, a court system that manufacture rights for artificial entities, corporate persons, when necessary for power grabs.

The reality is there is still a one person one vote in this country however difficult at times. The reality is that with the advent of social media and an internet in which net neutrality still reigns, a revolution independent of money can occur if the wherewithal from real grassroots activists is realized through active engagement with the masses. This  requires activating people on the internet. This requires having those who really claim to care get out of their comfortable surroundings and enter communities that are generally disfranchised not legally but through their implicit belief that they don't matter.

Grassroots organizations outside of Washington DC that are mostly funded by everyday people as opposed to grants from the same corporations perpetrating self-selective slavery, are hard at work. Move to Amend through affiliates and alliances have boots on the ground engaging folks generally left behind by those who claim to really want a democracy.

Lawrence Lessig instead of helping a candidate that for once is attempting to engage Americans of every stripe, a candidate that based on a verifiable history has never been beholding to Wall Street or corporations, decides that he may run. He released the following video.

Lessig wants to hack the political system. He wants to be the trustee for the people. He wants to run as a referendum president. The referendum, The Citizen Equality Act of 2017 has three basic tenet.

After a referendum to fix the political system has passed, Lessig would resign and the vice-president would become president.

The three tenets are noble. But none of them will solve the apathy that afflicts the country today. None of it will engage those who believe the system is rigged. If those laws are passed, there is still income and wealth disparity. There is still a failed criminal justice system. There is still a failed law enforcement system. All the ills that Bernie Sanders and every single Democrat and some Republicans speak about remain.

It seems that it is Lawrence Lessig who is not thinking big enough. One should engage with the masses to understand why real big thinking is a requirement for today's presidency. One should not forget Lawrence Lessig's last fad. Ivory tower platitudes just isn't it.