The train continues to roll. Inequality is growing yet, if one listens to the video from Credit Suisse, their is no urgency in describing the un-sustainability of said disparity. The Guardian reported the following referencing the report.

Global inequality is growing, with half the world’s wealth in the hands of just 1% of the world’s population, according to a new report which pointed to a rising discrepancy in prosperity in the UK.

The report by Credit Suisse also found that there was a slowdown in the pace of growth of wealth of the middle classes compared with that of the very richest. “This has reversed the pre-crisis trend which saw the share of middle-class wealth remaining fairly stable over time,” said Tidjane Thiam, chief executive of the Swiss bank. 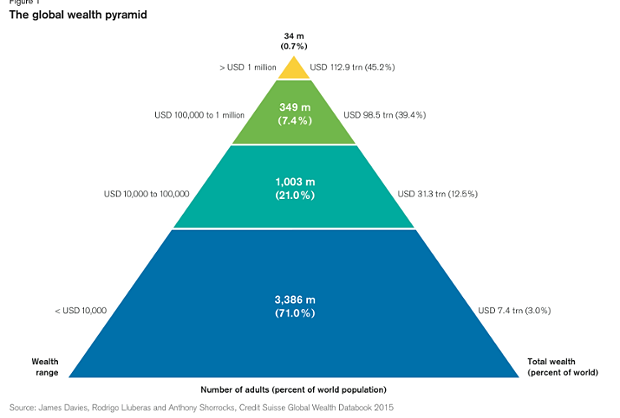 Each of the remaining 383 million adults – 8% of the population – has wealth of more than $100,000, including 34 million US dollar millionaires, who comprise less than 1% of the world’s adult population. Some 123,800 individuals within this group are worth more than $50m, and 44,900 have more than $100m. The UK has the third-highest number of these so-called ultra-high net worth individuals. 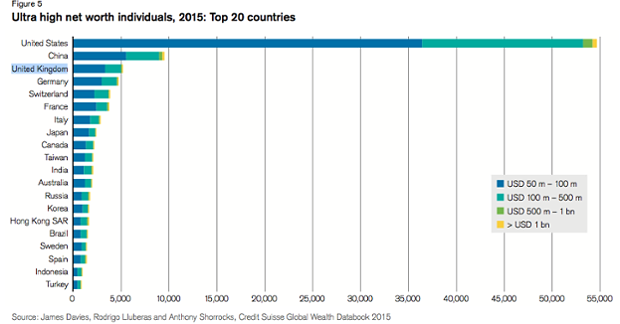 It is important that everyone understand that an economic system is man made. The distribution of resources is decided by those in power. No person created the earth. As such no one has any inalienable right to the earth's resources. Any value added to those resources should be distributed consummate with those who added said value. A stock broker adds little value to the conversion of oil to gasoline, yet he makes more than the operator of the refinery, the scientists who developed the techniques, and the roughneck who extracted it.

The idea then that society can accept a few monopolizing wealth because of an economic system that allows it is unconscionable. Everyone must first deprogram themselves from the belief that somehow the few that have accumulated immeasurable wealth are deserving of said wealth or have earned said wealth. That is a fallacy I have discussed before. Wake up America.