One of the things I hate is dishonesty. I hate when people take advantage of others.I think Tom Peacock Cadillac took advantage of my wife.

Here is the story. In May and June, my wife's electronic key for her car started to act up. Sometimes it opened the doors immediately. Other times she had to play with the buttons till the doors opened. Of course, the car cannot start without a functional electronic key in close proximity.

Because the spare key also behaved in the same manner, the next time it occurred she drove straight to the dealership, Tom Peacock Cadillac, from her Jazzercise class for service.

They called her and told her it would be $450 to take care of the problem. They claimed one of the electronic keys was bad. I thought that was crazy. I paid (donated) $155 for a false diagnosis. I started looking for keys online. I found that I could get them for about $80. I didn't yet purchase a new key as the key still worked, if intermittently. 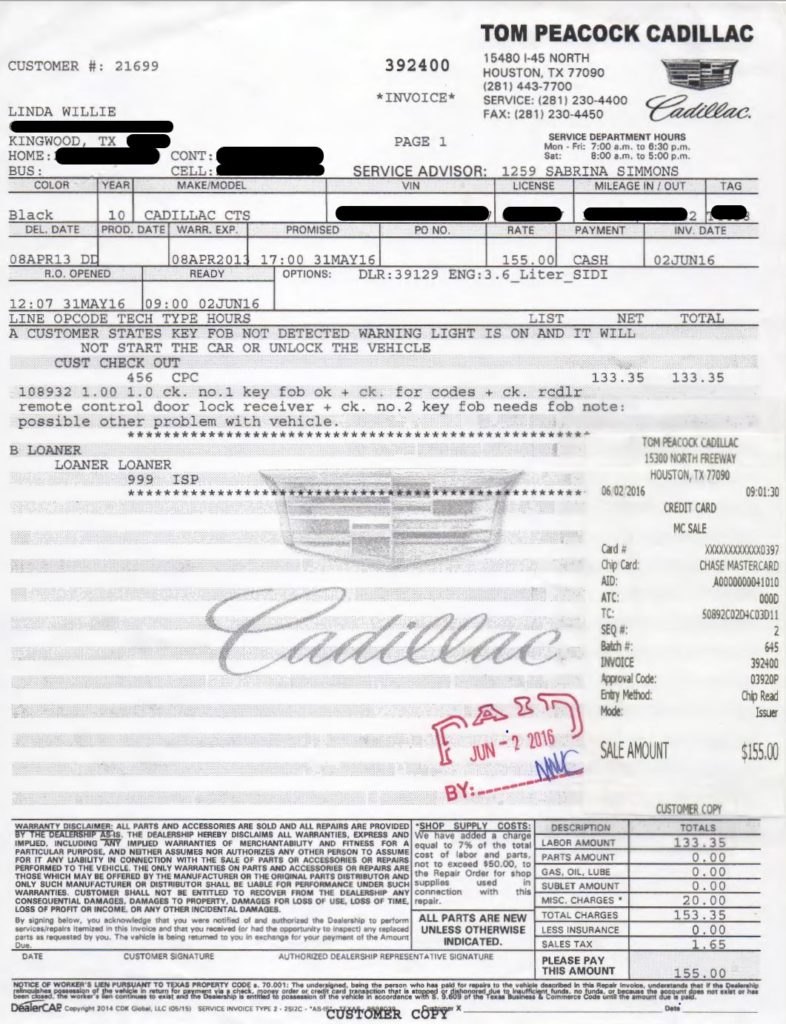 Well, today my wife thought she was stuck in the Jazzercize parking lot because this time the key stopped responding. She called me and while continuing to try, the key worked. She came home, picked up the spare key and headed to our local auto repair shop here in Kingwood. She went to West Lake Houston Automotive. Ironically way atop their building is their call sign, Your Dealership Alternative.

We are not looking for free service. In fact, as a business person myself, I believe in making money, but in an honest form commensurate with the service or product provided. My wife always used West Lake Houston Automotive and Tom Peacock Cadillac. I am sure my credit card records would reveal that.

I did not want to judge Tom Peacock Cadillac on likely an act of an incompetent or lax service agent or technician. I called the dealership and explained that West Lake Houston Automotive resolved that the issue was solely the batteries. Before consulting the technician, the manager claimed that their equipment read that one of the electronic keys was bad. I explained that if a battery is dying in any electronic device, it is likely that the information it emits would be suspect. I am an engineer who programs computers and have written hundreds of thousands of lines of code over the years for oil companies, NASA, and on many SCADA applications. I understand this stuff. In fact had I not been as busy, I should have taken the electronic key issue more seriously and did more research on the keys for my wife's car.

I wanted a partial refund. As I said, I want nothing for free. But I think the Cadillac dealership should be as good as 'Your Dealership Alternative.' The manager said he understood and would call me back. He called back about an hour or so later and said he could not do anything about it. He reiterated that one of the electronic keys is bad. To be clear, both keys with the battery change are working perfectly. I thanked him for looking into the matter and then told him that while I have no recourse with his dealership what I can do is relay my experience so this would not happen to someone else.

Folks, if you have automotive problems, I want to encourage you to visit West Lake Houston Automotive. They really are your dealership alternative.

If you feel you have been wronged by any business, tell your story. Helping others stay away from businesses that behave badly will force a change in behavior if they want to remain a business. Just like we have to engage government to make them responsive, so must we engage with businesses whether they are car dealerships, grocery stores, hospitals, insurance companies, or whatever to ensure they serve their purpose.

You earn my business, not from your ideology, political leanings, or pizzaz. You earn it from your honesty. I want nothing for free. I do want fairness.