It is easy to have courage when one no longer has to answer to a sect within one's party that has lost all sense of morality and decency. Republican Jeff Flake's symbolic act required little coverage but may convince a few Republicans to stop for a second to see if their moral compass will reset and not vote a pedophile into office. 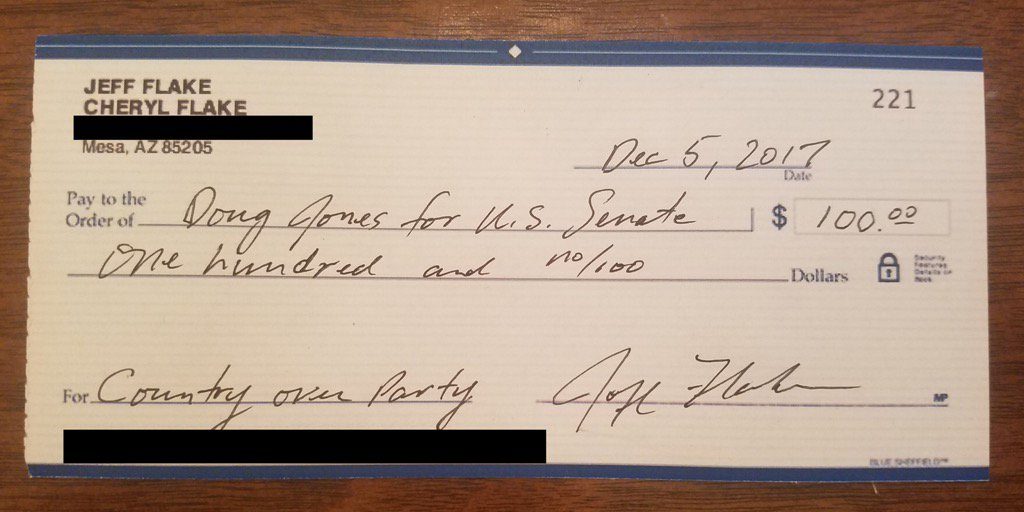 Jeff Flake is showing a welcomed faux courage as he goes against his party for one moral issue but fails miserably on something that will hurt millions. He sent the following tweet.

So Senator Jeff Flake sends Alabama's Democratic Senatorial candidate Doug Jones a campaign contribution. The idea is to show that a Republican will support a Democrat to ensure that a pedophile, Roy Moore, the Republican opponent does not get into office. This act is a commendable gesture. The thing is, Flake is not running for reelection. He is leaving the Senate. One can be very courageous when one need not worry about immediate reelection.

If Jeff Flake wants to show that he believes in the country over party, the American citizens over party, he would not have voted for the Republican tax cut scam. Attempting to keep a pedophile out of the Senate is important. But Roy Moore is only one Senator who individually wields little power to affect the entire country.

The Republican tax cut scam hurts millions and will kill millions every year. If Flake wants to show courage, he should never have voted for the bill. He still has time to determine if his tweet "Country over Party" is true. But don't hold your breath. Flake will likely run for another office down the road. His base will forgive him after this election cycle. The Plutocracy, however, would make an example out of him for voting against the bill by ensuring he has little funds to work with for any subsequent run for office. They have everlasting memories.