Robert Reich continues to be one of the major intellectual leaders in the Progressive movement and the resistance to Donald Trump's tyranny and the GOP's complicity. He has a request of a few Republican senators that will make them heroes in American history if they oblige. 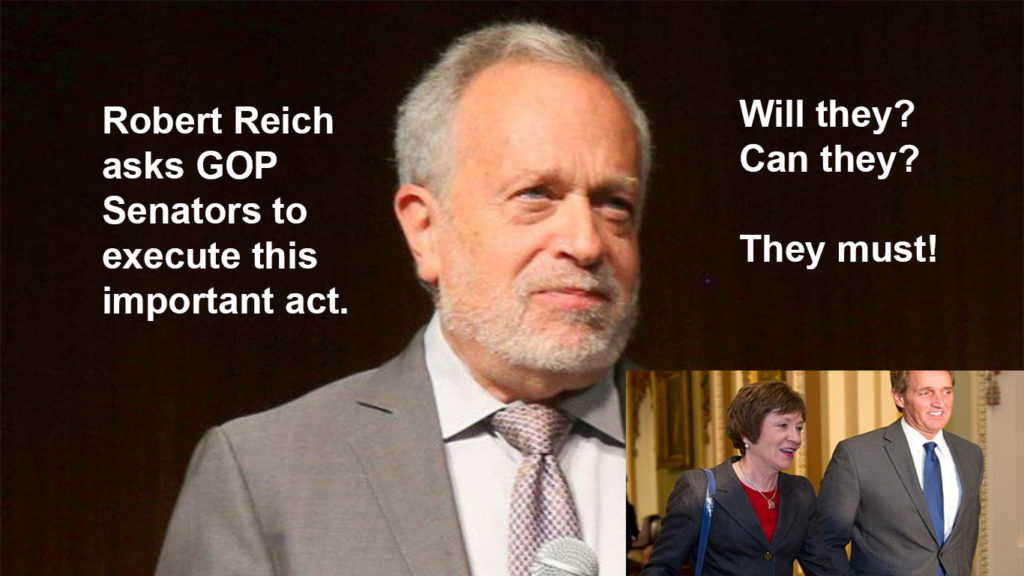 Robert Reich addressed several GOP senators in a striking letter to four Republican Senators with a suggestion to save the country. Will they do it? They must.

Robert Reich's letter explains why these Senators must become at minimum Independents who and caucus with Democrats. He tells why they must act now.

A foreign power has attacked our democratic institutions and, according to American intelligence, continues to do so. Yet the President of the United States is unwilling to fully acknowledge this, or aggressively stop it. Most of your Republican colleagues in the Senate will not force his hand. As a result, because your party has control of the Senate, there is no effective check on the President – or on Putin.

What is America to do? We will exercise our right to vote on November 6. But by that time our system may be compromised. The President must be constrained, now. Putin’s aggression must be stopped, now.  If just two of you changed parties – becoming Independent, and caucusing with the Democrats – the Republican Party would no longer have a majority in the Senate. The Senate would become a check on the President, as the Framers of the Constitution envisioned it would be. And the President would defend the United States, as the Framers intended. I implore you to do so.

There is precedent. I’m sure you remember Jim Jeffords of Vermont, who served as a Republican senator from 1989 until 2001. He then left the GOP to become an Independent and began caucusing with the Democrats. Jeffords’ switch changed control of the Senate from Republican to Democratic.

Jeffords left the Republican Party because of issues on which he parted with his Republican colleagues and the Bush administration. As he said at the time, “Increasingly, I find myself in disagreement with my party… Given the changing nature of the national party, it has become a struggle for our leaders to deal with me and for me to deal with them.”

I knew and admired Jeffords years before he switched parties. We worked together on a number of initiatives when I was secretary of labor. He was a humble man of principle and integrity. He retired from the Senate in 2007, and died in 2014. I appeal to the four of you to follow his noble example.

You have not pledged yours souls to the Republican Party. You have pledged yourselves to America. Now is the time to deliver on that pledge.

Trump has already inflicted much damage with his tax cut scam, ACA sabotage, environment killing deregulations, and much more.

It is within the power of a few sensible Republicans to redirect the trajectory of the country. One hopes they will.