This story is unbelievable. I have stated for a long time that Republican leadership are great at projecting. They are hyped up about critical race theory. Of course, it is them who are trying to change history. This says it all.

Republican efforts to demonize any teaching about race or racism in U.S. history picked up yet another perfect defining moment recently when a “grassroots” parent group was outed as a Republican astroturf effort. “Prep School Accountability” claimed to be a group of parents concerned about their kids’ education (at New York private schools), but it turns out that notorious anti-union and pro-corporate astroturfer Rick Berman’s lobbying firm was involved in the campaign to keep education racist.

That news followed other key revelations about the Republican fight against the teaching of critical race theory anything about racism such as TV host Marc Lamont Hill revealing that some of the enthusiastic backers of that effort don’t even know what critical race theory means, or former Love Connection host and current right-wing podcaster Chuck Woolery suggesting that it’s too bad Hitler didn’t nip the original critical theory school in the bud. 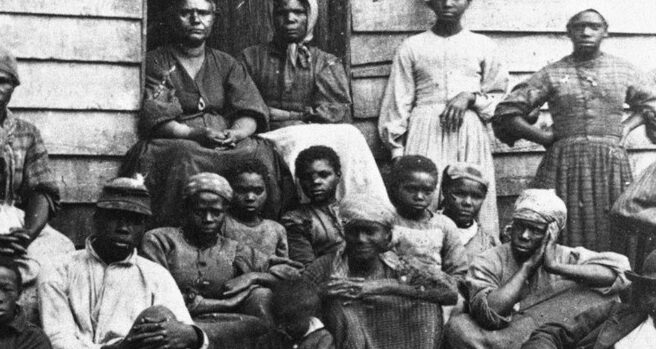 What would these warriors against what they characterize as indoctrination prefer to see in schools? We know, thanks to the valuable work of The Root’s Michael Harriot, that many of the congressional opponents of the 1619 Project (a target frequently lumped in with critical race theory), learned whitewashed versions of U.S. history, in some cases from textbooks influenced by the United Daughters of the Confederacy. But that kind of history education has not been left in the past.

One of Louisiana’s two approved history textbooks for eighth graders is literally teaching the Civil War from the perspective of the slaveholders. “Our cause is just and must prevail,” the slaveholder in question wrote in her diary. But, according to the textbook, she faced a “justified fear that their slaves would abandon the plantation,” and she and her mother became refugees after being “forced” to go to Texas following 120 enslaved people they had first sent there. After the war, though they still had a huge plantation, they had “lost all their property in slaves” and “had to face the reality of planting and harvesting their fields with freed people who, Kate regretted, now demanded ‘high wages.’”

It’s pushback against this kind of history—in which the concerns of a wealthy slaveholder are presented sympathetically while enslaved people are the source of “justified fear” and problematic demands for “high wages”—that Republicans are so worked up about.

Over the weekend, teachers across the country joined a national day of action to underline their commitment to teaching a full version of U.S. history, including the nation’s racial and too often racist history. Thousands of teachers have signed a pledge saying, simply, “We, the undersigned educators, refuse to lie to young people about U.S. history and current events—regardless of the law.”

But some teachers say that their colleagues are intimidated by the laws, and that the attacks on “critical race theory,” which no one is actually teaching at the elementary, middle, or high school levels, will have an effect on the teaching of anything about race—exactly as Republicans intend.

”The White teachers who started doing a little bit more teaching about race and racism are now going back to their old way of teaching,” sixth-grade teacher Monique Cottman told Black Lives Matter at School co-founder Jesse Hagopian. “I’ve had conversations with teachers who said things like, ‘I’m getting so much pushback for teaching Alice Walker, I’m going to go back to teaching what I used to teach.’ So all the teachers who would have done a little bit of what I was doing—anti-racism work and culturally responsive teaching—they’re not going to do anything next year. They’re already declaring, ‘I’m not doing nothing,’ or ‘It’s not safe,’ or ‘I don’t want to lose my job.’”

That’s the game. It’s not about the legal academic school of critical race theory. It’s about Alice Walker. Or a history not told from the perspective of slaveholders. It’s about keeping white people on top in the teaching of history and literature, and intimidating anyone who would teach anything else.

Source: Here’s what attacks on critical race theory are defending: History from a slaveholder’s viewpoint