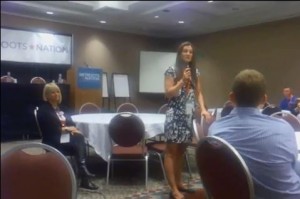 Kystal Ball came to Netroots Nation to tell her story about the extreme sexism she endured during her run for Congress in Virginia. She said she endure a lot of misogyny but she wanted to speak specifically on what occurred when a Republican blogger dug up some old college pictures and posted it.

While her advisors had suggested that she either deny the pictures were of her or to simply not talk about it, the Women’s Campaign Forum (WCF) told her to immediately go in front of the cameras and tell the truth about the pictures and to specify the sexist nature of the release.

The President of the WCF explained that while these sexist events usually initially drops the female candidate’s poll numbers, if the female candidate immediately confronts the issue and specifically call it out as sexist, she ultimately gets a poll bump.

Krystal Ball did just that. She gave interviews and confronted the issue directly. While she did not win her election, the dynamics of the 2010 wave was likely more causal than the smear against her.

This event should be a learning experience for every young person, male or female. In today’s wired world anything ever placed on the Internet is there permanently and will always be accessible.

Krystal Ball’s reaction to this setback and the poise with which she handled it speaks well for her spinal fortitude. I am sure she will make an excellent Congresswoman or whatever political office she may want going forward.