Acceptance of a growing income disparity is a recipe for economic depression. Fixing our country’s economy will require a psychological deprogramming in America. The reality is that our politicians are a reflection of ourselves. The dysfunction we see in Congress is no different than the dysfunction among our citizenry. We have allowed our corporate class through their media empires & think tanks to corrupt our objectivity in such a manner that we no longer analyze situations or data. We have allowed them to redefine the causes of all our problems in a manner that pits the working and middle class against each other.

Our growing income and wealth disparity is a dangerous situation socially and for the well-being of our economy. When policies cause wealth and income to accumulate to the top 1%, economic activity naturally slows because the wealthy’s marginal propensity to consume is much less than that of the working and middle class. In other words if 1 billion dollars is earned by 50,000 everyday people instead of a single, super-wealthy plutocrat, then those 50,000 everyday people will generate a LOT more economic activity because they will spend most of that billion dollars right away, while the plutocrat may invest the excess money in China or just save it. It should be noted

Under President Obama we have had the lowest income tax rates ever, including under President Reagan. These low rates have been a windfall for those with the largest income and wealth. We chose to believe the claim that bigger and bigger tax giveaways for the wealthy will benefit the rest of us when their wealth spills over and trickles down to us. If we were thinking for ourselves, we might have concluded by now that, if Wall Street tycoons cause a global financial market collapse, if the U.S. economy craters, and if factories are closing in America while opening in countries where there is very cheap labor, “trickle-down” policies have failed and should be repealed.

In bailing out the banking system we chose to believe that if those that had caused the collapse in the first place did not get their bonuses, they would move on to greener pastures. 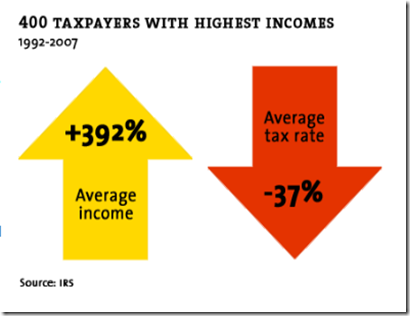 If we were thinking for ourselves, we would have concluded that in the global meltdown they had caused, there were few places they could have gone. Moreover, their risky financial products are wealth extraction schemes, transferring capital from the working and middle class to a gambling and unproductive upper-class, without creating any jobs at all.

Unions have been responsible for improving working and middle class wages and working conditions. They have ensured that as the American worker has become more productive they would be compensated appropriately. Corporations unite under their own union, the Chamber of Commerce as well as under other trade organizations in order to lobby for their own interest. If we were thinking for ourselves we would support unions for every American worker so they have enough leverage to negotiate with corporations.

But, our corporate media has been able to convince many Americans that our bankers, hedge fund managers, CEOs, and stock brokers are worth more to society than 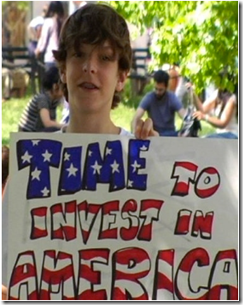 the teachers, the engineers, the doctors, the lawyers, the garbage men, and many other gainfully employed citizens who allow society to function. We have allowed unions to be vilified. This form of brainwashing is catastrophic because it has allowed the working and middle class to acquiesce to policies favoring the wealthy. In the process the wages of the middle class has remained stagnant even as the top 1% has more than tripled over the last 30 years.

In order to save the country Americans must reassert their self-worth by reeducating ourselves about who really keeps our society humming. We must demand the actual piece of the pie we have worked for. Working middle class Americans will remain in a state of depression absent demanding and receiving the real income they’ve earned which will effectively spur economic growth.

If we allow ourselves to dispel the multitude of fallacies that we are bombarded with from our corporate media, we would ultimately elect politicians who in reflecting us will govern in our best interest as we start voting in our own best interest. At that point we would have saved America.