Melissa Matthews, a 32-year-old a stay-at-home-mom from Leander, Texas, said she works a job from home at night while her children are sleeping and her husband works two jobs. 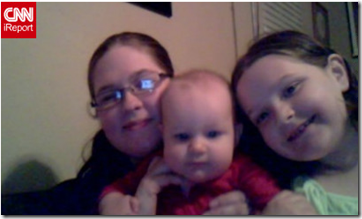 Melissa Matthews is frustrated that the House has not passed an extension.

She said her husband just found out from his employer that he will be out $80 in January because of the standstill in Congress.

"They are messing with my family who can barely make ends meet," she said. "I am just very upset at the way the Republicans in the House are trying to manipulate this bill and get their way on other issues by threatening to take the payroll tax cut away. The extension needs to be passed and the other issues need to be worked out later. There is no more time to argue the issue. I appreciate the Senate passing the two-month extension and I want the House to do the same."

Frequent iReport contributor Egberto Willies says the payroll tax cut wouldn’t affect him personally because he works for himself as a software developer in Kingwood, Texas.

But he said everyone getting $40 could mean the difference between the “economy surviving or going back into a recession.”

Cindy Riley is a 54-year-old homemaker living in Center Point, Alabama. She said that $40 a paycheck for her family would help pay for several utilities or bills.

"$40 pays for the Internet access for a month, and I suppose I could cut that out, but we have no other entertainment and I use it to pay all my bills and stay in touch with my family so that I can save the price of stamps. $40 pays for my pay-as-you-go phone for about four months. Can't cut that out, It's the only 'phone we have, we cancelled the landline long ago."

Payroll tax cut standoff's impact: What $40 a paycheck means to you – This Just In - CNN.com Blogs