A Kingwood political activist says his home was targeted in an attack with fireworks on Jan. 1, leaving a squirrel dead but his family unharmed. 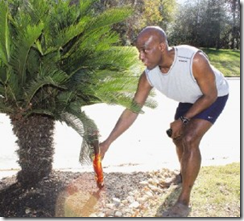 Egberto Willies, the first-year president of the Kingwood Area Democrats, was working in his home office Sunday night, around 11 p.m., when he heard a series of loud bangs coming from the street in front of his house on Longflower Lane.

“At first when I heard the noise I just thought it was a whole bunch of fire crackers go off,” Willies recalls. “Then I heard my daughter scream.”

Willies said his daughter became frightened when she heard the noises, which sounded like gunfire, because she knew her mother was about to go outside to retrieve the mail. Thankfully, Willies said, his wife remained safely indoors, and a squirrel – caught up in the volley of explosions – was the only casualty in the detonation of what later turned out to be a 140-shot firework rocket. Willies found its body in the middle of his walkway.

The family’s security surveillance footage shows a man swiftly walking up to a bush in front of the Willies’ walkway and position a 2-foot firework rocket in the ground. The rocket didn’t find purchase and the man proceeds to nestle the device among the branches of the bush. He runs off-camera only to return a couple of seconds later when the firework fails to detonate. The suspect is then seen as he places the device in a second bush, taking time to aim the firework directly at the Willies family’s front door. This time, the firework went off in a spectacular display.

Two days later, little evidence of the spectacle remained, aside from some charred palm leaves. The Willies family had already cleaned up the soot that was covering the front door and entryway of their home. No windows were broken; no one was injured.

Willies wonders if the attack on his house was politically motivated. In the past, campaign signs have been stolen from his front yard, he says, his organization every so often receives hate mail, and he is aware of a steady stream of hateful comments on a popular local message board.

Willies says this sort of intimidation comes with the job. But, he adds, it certainly won’t make him back off from his political view points or the delivery of his message.

“These are just punks. I have nothing to say to the person who did this. It’s just a scare tactic,” he said. “I’m careful and I don’t take any chances, but I’m not worried. Whenever you do this kind of political stuff, you have adversaries. But things need to be said, and they’re not going to make me shut up with this.”

Willies plans on reporting the incident to authorities. Anyone with information is asked to call the Houston Police Department Kingwood Division at 281-913-4500. The possession, transport or detonation of fireworks within the city of Houston carries a fine of up to $2,000. In addition, the suspect could face a charge of criminal mischief if apprehended.