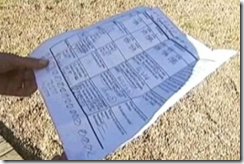 Many times people are unfairly called racist for a Freudian slip or an ignorant statement. I believe we all have some prejudice in us mostly based on ignorance of those we do not know and sometimes because of some innate carnal response that may be built in. That said, as intelligent American citizens living together since the 60s we all know each other either directly or through simply our intermingling existence whether actual, virtual, or through some other avenue.

It is for this reason that the homework given to third grade students at Atlanta area Beaver Ridge Elementary School is evil. Providing students with matter of fact math problems with slavery acts is unforgiveable and any teacher doing this is not fit to teach kids. The negative effect on a kid’s rather fragile psyche is difficult to overcome. Having this message coming from teachers, the symbols of authority for these kids makes it even worst.

One word problem said, "Each tree had 56 oranges. If eight slaves pick them equally, then how much would each slave pick?" the station reported.

Another read, "If Frederick got two beatings per day, how many beatings did he get in one week?"

One father, Terrance Barnett, said he called the principal at Beaver Ridge Elementary school in Norcross, Ga., to complain after his son brought the provocative assignment home.