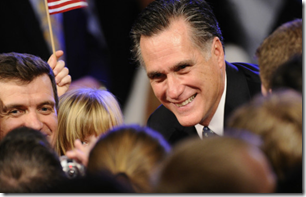 Editor's note: This post is part of the Overheard on CNN.com series, a regular feature that examines interesting comments and thought-provoking conversations posted by the community.

"What's going to be hilarious is when the defeated pretend to endorse the candidate they just got done slandering."
– Austinstar

Former Massachusetts Gov. Mitt Romney remains in the spotlight as the GOP front-runner after winning the New Hampshire primary. With 95% of precincts reporting, Romney received nearly 40% of the vote in Tuesday's balloting. Rep. Ron Paul of Texas picked up 23%, and former Utah Gov.  Jon Huntsman garnered 17%.

Romney received a lot of criticism from readers – among them liberals, independents and Republicans who didn't vote for the politician. Still, a selection of some readers' remarks illustrates not only why Romney has been successful so far in this unusual GOP race but also why Paul has made a strong showing as well.

If you have thoughts on New Hampshire's outcome, be sure to share these views on video at CNN iReport as well as in the comments area below.

People who spoke in favor of Romney often talked about change.

Florida425: "I voted for President Obama last election, but I will be voting for Romney this time around. President Obama has had time to turn things around, and I haven’t seen enough to re-elect him. Go Mitt!"

CincyIndep: "A Romney win is a rejection of the tea party's extremism. They've done everything they can to get rid of him and the rest of the Republican Party and independents keep him in there. It's a battle for the Republican Party's soul, and the moderates are winning. Our country has had just about enough of the tea party (and far-left) extremism. Let no group in our society rule us all of the time."

Some assessments were more lukewarm.

rsmnr: "At least this is not such a scary prospect like Michele Bachmann or Herman Cain or Rick Perry."

Others said that a Romney win doesn't say much.

No9: "Willard Romney, the least offensive of a very offensive bunch. Nice way to pick a candidate. ... This should be fun."

Some commenters strongly opposed Romney, saying he was less than an ideal candidate.

gofigure063: "Does Romney even realize the only reason he is moving forward is because the GOP pick is not exactly the best?"

Liberals2012: "I wouldn't even let the GOP pick a fresh banana for me."

One reader said the current political environment does not work in favor of the GOP.

kgbpazan: "The core problem for GOP challengers is that they cannot be respectable Republicans because, as (New York Times columnist Paul) Krugman pointed out, Obama has that position occupied. They are forced to move so far to the right that they render themselves inherently absurd."

Some Romney critics have characterized him as a "flip-flopper," and many commenters referred to his evolving positions on issues over the years.

yooobetcha: "Is this the same Romney that was pro-choice before he ran for president? ... Romney has flip-flopped so many times, he should be debating himself."

A few readers criticized Romney's speech after his primary win, but many said they liked it quite a bit.

rawpimple: "Actually loved that speech by Romney! He has won over this independent! Made the mistake of voting for Obama last time. I will not make the same mistake twice. The independents will decide this election. Hopefully, they all will follow suit!"

CNN iReporter Egberto Willies of Kingwood, Texas, called the speech brilliant but disagreed on one point, saying he didn't want to see past economic principles come back. He also said income and wealth disparity is worse than it used to be.

"If America will be so gullible to decide, let us give supply-side economics a try again," Willies said. "After all, 30 years of this has given us income and wealth disparity. The numbers are out there. Mitt Romney is promising us the same medicine again."