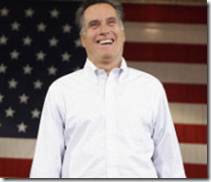 Poor Mitt Romney can’t get a break. We always knew he was fairly smart (well not a complete imbecile). He finally admitted that spending cuts as every intelligent economist has said will hurt the economy. It will kill economic growth.

In fact it is time for the President & liberal activist to segway into the following statement. “Mitt Romney’s own words stating that spending cuts hurt the economy and as such the middle class implies a Republican intent to collapse the economy since they are calling solely for spending cuts. They believe a collapsed economy will gain them the White House. They are willing to sacrifice Americans for power. It won’t work.”

Mitt Romney stepped on his message a bit Tuesday, and on attempts to draw attention to a forthcoming tax reform plan, by saying that spending cuts can damage the economy.

"If you just cut — if all you’re thinking about is just cutting spending — why as you cut spending you’ll slow down the economy, so you have to at the same time create pro-growth tax policies," Romney said during a town hall meeting in Michigan.

His comment drew attention from several news outlets and liberal blogs. MSNBC’s "First Read" pointed out that Romney’s remark represented "a rhetorical departure from the rest of the Republican Party, which has done battle with the Obama administration over the past year about the best course for economic growth."

"It confirms yet again that Romney is not a limited-government conservative," Roth said. "The idea that balancing the budget would not help the economy is crazy. If we balanced the budget tomorrow on spending cuts alone, it would be fantastic for the economy."

Romney spokesman Ryan Williams tried to clarify the remark in a statement:

"The governor’s point was that simply slashing the budget, with no affirmative pro-growth policies, is insufficient to get the economy turned around. However, he believes that budget cuts –- especially in the context of President Obama’s unprecedented spending explosion –- are a step in the right direction. As he made clear in his economic plan, he believes that spending cuts that reduce the size of government and balance the budget are crucial to economic growth and job creation."

House Republicans have dubbed themselves shepherds of the "Cut-and-Grow Congress," a phrase they’ve repeated to hammer home the argument that cutting spending will boost the economy. "Our Congress will be a cut-and-grow Congress. We believe we have to cut spending," House Majority Leader Eric Cantor (R-Va.) said. "When the president talks about competitiveness, sure, we want America to be competitive, but then when he talks about investing, I think even someone from the White House this week had said that this is going to be a cut and invest White House. We want to cut and grow. When we hear invest from anyone in Washington, to me that means more spending."