Over the last few weeks CNN has been seeking out iReporters who had positions and analysis on Romney’s inability to seal the deal with Republicans in their primaries. CNN iReport producer Michael Saba wrote the following piece at CNN.com on our views and analysis. 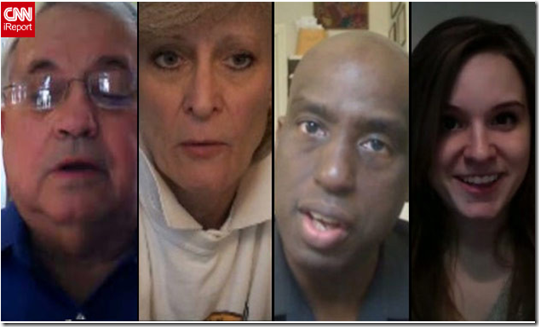 Editor’s note: This story is part of iReport’s continuing coverage of the 2012 U.S. election: Join the debate.

(CNN) — Mitt Romney just can’t seem to get conservatives to come to the altar and say "I do."

It’s something that looms large in the minds of political junkies and concerned conservatives everywhere: Despite a sizable financial advantage over his rivals and a top-notch ground game, Romney is still struggling to unite the warring factions of the GOP and secure the nod from his party.

CNN tapped the pool of passionate pundits and politics-watchers on iReport and asked for their take on Romney’s as-yet-unsuccessful efforts to sew up the presidential nomination.

GOP party honchos, not conservatives, chose him: Conservative voter Vernon Hill of Montread City, North Carolina, echoes other disaffected Republicans in his area when he says that Romney’s troubles are "very simple: He was forced upon us by the GOP establishment, and we have disagreed with this," he said.

"We’ve had enough. We want someone that won’t run away, but will stand their ground through whatever happens. Romney has failed to impress us," he said.

Independent voter Matt Ziemeski of Redding, California, was less charitable with his word choice, dubbing Romney the leader of "The Four Stooges" in the wake of Super Tuesday.

"When Santorum or Paul or Gingrich gets on a roll with an issue you can easily see their supporters fired up and defending their candidate and those beliefs very strongly." Romney, he says, inspires no such passion.

The flip-flop factor: The most common criticism of Romney among iReporters should sound familiar: His shifting stances and constant triangulation on a raft of red-meat issues.

Left-leaning iReporter Egberto Willies of Kingwood, Texas, summed up Romney’s struggle as part of what he sees as a rightward shift in policy the GOP has undergone in recent years.

"Most of the sensible candidates, who would have likely beat President Obama because of our economic state, felt they could not get through the primaries without compromising their true values," he said, citing the failed campaign of Jon Hunstman as an example.

"Romney was willing to compromise his true values and I think that will make him unelectable ever again at any level, given a solid opponent of any ideological persuasion."

He can’t get his base fired up: Then there’s the matter of an enthusiasm gap with Romney that haunts the GOP like Banquo’s ghost.

Two conservative iReporters weighed in after Super Tuesday to say that they simply didn’t vote in their states’ primaries — not because they’re unengaged citizens, but because the prospect of Romney as the inevitable nominee of their party made the process wholly unappealing.

Katy Brown of Kent, Ohio, was frank: "It sucks, honestly."

She’s not planning to vote for Obama, but none of the other candidates she’s researched inspire her in the least. "There’s not a person on the ballot, Democratic or Republican, that I think deserves to be president," she said.