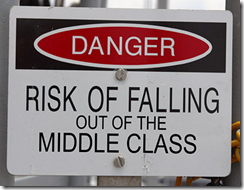 On my Coffee Party radio show Politics Done Right aired every Saturday between 12:00 Noon Central and 2:00 PM Central, I received a caller that illustrates why we need to ensure that we are reaching Americans in a manner that materially affect their lives. Many of us have continuously asked why is it that those most helped by progressive policies systematically vote against their own interest. In fact books have been written about this (What’s The Matter With Kansas).

These people are not stupid. They are simply humans. We were discussing President Obama’s new bold immigration move to stop the deportation of undocumented residents that were brought to this country when they were young. One of the things this “directive” will allow is for these residents to work.

The caller to my show while stating that she had nothing against immigrants was concerned that having another pool of workers would materially affect her family’s life. She said her husband that work in construction was always undercut by the immigrant worker because they worked for less. She also assumed that they could work for less because taxes and other things citizens are responsible for, that immigrant worker might not be. In effect she feared the immigrant not out of racial animus, but because she felt it materially affected her family.

This story can be repeated when we watch politicians try to pit rural America against urban America. When some politicians talk about Middle America being the real America it is their intent to divide so they can then pit groups against each other. When Scott Walker’s Super PACs put out advertising that says the other side will take away guns, they are playing into that carnal personal response; I must not vote for the guy that is going to hurt me.

The Right Wing has understood that selectively personalizing issues specific to regions around the country is successful because that is how humans are wired. They also understand that in our fast pace world where the working middle class do not have the time to spend doing a lot of research, getting their message out however untrue and repeating it “ad nauseum” makes it true to a large segment of the country. They have an echo chamber in Fox News and the Right Wing Echo Chamber of Talk Radio to hammer that message. What is even worse is that they have enlisted the evangelical leaders to promote fallacies by giving them the social carrot of being completely against same sex marriage and abortion. This is doing much harm to our country.

All however is not lost. I explained to my caller that her fears were justified. After all she is living it. I also explained that it was not the policy she should be fighting. This policy lives up to our American ideals of fairness and humaneness. She should be fighting that the American Plutocracy has so limited the amount of work that in effect we have a worker glut.

Remember the services and products this country’s middle class have provided are directly responsible for those who are wealthy. Creating a false depression is by design. It is used to have the working middle class fight among each other for the American Dream, a good paying job. In that process the intent is to depress wages to increase the profits of a few.

We must not only sit here and read blogs and surf the Internet as we fall into helplessness about our future or the direction of the country. We must make the future. We must talk to people, eye to eye, over a cup of coffee, at the grocery store and tell the real truthful story. We must be the media. Over time it is assured then that Kansas and the working middle class will ultimately vote in their own best interest.