A Little Bit of History This Weekend 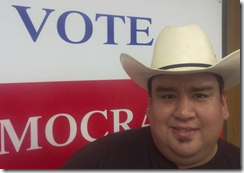 This Saturday, a group of Chican@ activists are getting together in Austin to remember the good ol’ days at the La Raza Unida Party Reunion. An article in the Austin Statesman has it dubbed as “El Ultimo Adios,” but I’m of the opinion that one just doesn’t bid “bye-bye” to history.

Still, there will be much discussion and reminiscing of where Chicanos, and Latinos overall, have been and are in today’s politics. One particular note of remembrance is that it is the 40th anniversary of the LRUP candidacy of Ramsey Muniz for Governor–a candidacy which taught the Texas Democratic Party a lesson that almost brought down Dolph Briscoe. Other LRUP candidates and activists of the past will speak–most are still involved today in progressive politics.

After Raza Unida’s demise, many, if not most, of its members returned to the Democratic fold. But by then the third party had forced Democrats to move to the left and to embrace a more progressive platform that endures today, Cotera said. The children of some Raza Unida members are now among the Democratic Party’s most progressive leaders in Texas, she said, such as San Antonio Mayor Julián Castro and State Rep. Joaquin Castro, brothers whose mother, Rosie, was a founding member of Raza Unida.

A recent Gallup poll rates Latinos as being independents (51%), with Democrats getting a nice chunk (32%) and Republicans hanging at 11%. This is no surprise. And this caused some buzz, but one has to get passed the first part of the article.

The poll, however, took into account each respondent’s partisan leanings. The majority of the self-identified independents – 52% – leaned Democratic, compared to 23% who leaned Republican and 20% who truly had no party leaning.

And 67% of Latinos still back President Barack Obama.(CONTINUED)

A Little Bit of History This Weekend |