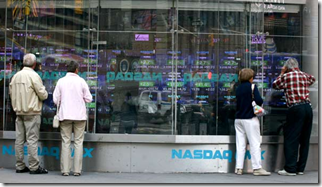 The following article by Professor of Economics Emeritus Richard D. Wolff is excellent. In simple words he details the real cause of the 2008 depression as well as the reasons we are unable to climb out of it. He provides the solution which is easier than one would think.

I posted a similar blog yesterday, of course lacking the gravitas of the Professor Wolff. I wish Professor Wolff did not stress “capitalist” so extensively in the article because many that would get so much out of this article will immediately stop reading or think Professor Wolff was using the demise of our economy to push an anti-capitalist agenda. It is much better when citizens realize the failures of our economic system based on the fact based information in the article rather than having their ideology become a hindrance to enlightenment from the article.

Read the article in its entirety then let me know what you think.

After five years of crisis – with no end in sight – it’s time to evaluate what happened, why and what needs to be done. One key cause of this crisis is the class structure of capitalist enterprises. I stress that because most treatments miss it. By class structure, I mean enterprises’ internal organization pitting workers against corporate boards of directors and major shareholders. Those boards seek first to maximize corporate profits and growth. That means maximizing the difference between the value they get from workers’ labor and the value of the wages paid to workers. Those boards also decide how to use that difference (“surplus value”) to secure the corporation’s reproduction and growth. The major shareholders and the directors they select make all basic corporate decisions: what, how and where to produce and how to spend the surplus value (on executive pay hikes and bonuses, outsourcing production, buying politicians etc.) Workers (the majority) live with the results of decisions made by a tiny minority (shareholders and directors). Workers are excluded from participating in those decisions: a lesson in capitalist democracy.

US capitalism changed in the 1970s. The prior century of labor shortages had required real wage increases every decade (to bring in immigrant workers). In the 1970s, many capitalists installed labor-saving computers, while others relocated production to lower-wage countries. Demand for US laborers fell. Simultaneously, women moved massively into wage work as did new immigrants from Latin America. The supply of laborers in the US rose. Capitalists no longer needed to raise real wages, so they stopped doing so. Since the 1970s, what capitalists paid workers stayed the same. Meanwhile, computers helped labor productivity to rise: what workers produced for capitalists to sell kept increasing. Surplus value (and profits), therefore, soared (stock market boom, rising financial sector etc.) while the wage portion of national product/income fell.

By making these changes, US capitalism provoked a classic contradiction/problem for itself. It paid insufficient wages to enable workers to purchase growing capitalist output. The solution, led by the fast-growing financial sector, was two-fold. First, it cycled rising corporate profits partly into major new consumer lending (mortgages; car loans; credit cards; and, later, student loans). Rising consumer debt sustained growing mass consumption despite stagnant wages, and so postponed an otherwise certain economic downturn. Second, financiers promoted profitable new investments for corporations and the rich (securities based on consumer debts and credit default swaps that insured such securities). Financial corporations displaced non-financial corporations as dominant in the US economy. Financial transactions based on consumer debts built on stagnant wages (the ultimate means to service that debt): those fruits of capitalist decisions brought the “2007 crash.” (What is widely known as the crash of 2008 technically began in the fourth quarter of 2007.) The crisis nightmare began: a cyclical downturn coupled to long-run decline in workers’ purchasing power. [More]