First of all, Charlotte is a beautiful city. The welcome from the city has been extremely warm. From the time I got off of the airplane the folks have been nice and helpful.

I flew not knowing how I was going to get to the hotel. They were helpful in getting me on the right buses all with a smile.

Now I have one issue. The Supreme Being is an equal opportunity offender. It is raining off and on. I was told it was the remnants of hurricane Isaac.  Do not quote me on that. 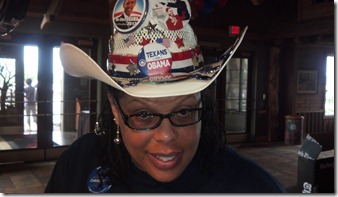 Anyway I got to the hotel and as I walked in Marc Croes, the Kingwood Area Democrats Membership Director was walking in as well. We went and got me some credentials. Marc went to rest and I went to town. To say the least it is quite eventful. The enthusiasm of the delegates is extremely high.

The young lady pictured here rode on my bus and I simply had to get that picture. I cannot recall her name right now but she is with the San Antonio delegation. She was quite familiar with our delegation as she has worked for State Senator Rodney Ellis.

While walking around I came across the abortion debate. I will be posting some of the raucous rally at my CNN iReport page. I also did some interviews on the bus with the Rhode Island delegation that I posted there. 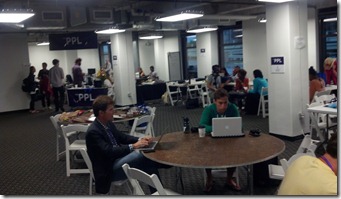 After putting my luggage up in the room I immediately jumped on a bus and headed downtown. I joined CJ, president of Clear Lake Democrats and Roger, a recent UT graduate on the bus to the convention center where we spotted what we were told was Michelle Obama’s motorcade holding up traffic. We were trying to get to a Texas Exes event with Paul Begala. I saw Paul Begala and state representative Garnet Coleman but they were talking so I took off to The PPL, the place where bloggers and new media are 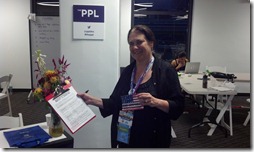 writing and uploading their stories. I had to meet Pat Johnstone from Move To Amend to discuss our strategies for tomorrow.

An interesting thing happened. I was in the middle of downtown asking for directions to The PPL and a lady stopped and gave me directions. She said she had to meet someone out there as well but had to run to do something else. A few minutes later I got a call from Pat that said she is looking for me and could not find me at PPL. I told her where I was. Lo and behold the woman who guided me to the place was in fact Pat who I never met before and who coincidentally told me how to get here in the middle of downtown Charlotte.

Ten minutes later who would walks into PPL? Absurdity Today political satirist and cohost on my show Politics Done Right last week, Julianna Forlano. She is performing tomorrow here with Elon James comedian and host of This Week In Blackness.

All in all it is tiring but fun. The thing is the real work does not begin till tomorrow. Progressive Forum, Occupy Events, Convention Floor events, and more videos and pictures as we put out both Move To Amend messages and Coffee Party USA messages.