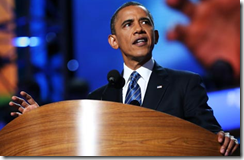 I was in the Arena at the Democratic Convention listening to President Obama’s speech. While I liked the speech I was not at all emotionally moved by it. The reality is that is a very good thing.

Speeches that move people in the moment are usually speeches that can be very ineffective in the long run as those moved by those speeches are disillusioned by the unfulfilled lofty aspirations and expectations. As such I believe this speech fits that of a second term presidential candidate with many unfulfilled tasks.

President Obama had to have had three specific pieces of information that he needed stamped into the heads of Americans if he wants their vote. This was accomplished but must be reinforced as the Republican misinformation and effective lying machine is ramped into high gear.

The president had to force a large part of the American populace that have a short attention span and a short memory to recall the fears they all had of a potential economic collapse and the negative effect it would have had on their lives had the president not instituted policies that prevented said collapse. He did this as best he could in a speech of this type. It will be up to surrogates to personalize this issue further to those Americans and up to the president to ensure he keeps that message on the stump.

The president had to believably let Americans understand that Mitt Romney’s past in the financial sector makes him not only unqualified to be president but undeserving. The most important tenet Mitt Romney has failed at is biblical verse Luke 12:48 “But the one who does not know and does things deserving punishment will be beaten with few blows. From everyone who has been given much, much will be demanded; and from the one who has been entrusted with much, much more will be asked”. While this is a Christian tenet it is generally accepted by all. Many wanted the president to disregard Romney’s shenanigans at Bain Capital and his use of foreign bank accounts. The president must not as this is at the core of what makes him unfit to be the president of America. The requirements of a President many times are diametrically opposed to the ruthless and inhumanness of vulture capitalism. Thankfully the president made some of this a part of his speech and must expand on it in a manner that personalizes it for every middle class American citizen.

Lastly the president must make the case for his reelection by specifying his vision and differentiating it from Mitt Romney’s vision. This is where the president’s speech excelled. He made this election a real choice and he was effective at it.