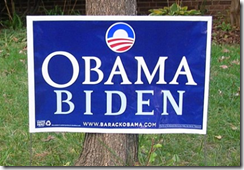 A Woman in Texas says that a person who appears to support Republican presidential nominee Mitt Romney vandalized her pro-Obama yard sign with racist and vulgar language.

Cassy, a 34-year-old white business owner in McKinney, Texas, revealed on Friday that someone had covered her Obama yard sign with the message: “N*GGER LOVER — Obama Sucks Dick!”

The back side of the sign was covered with, “Romney & Ryan: Christian. White. Anti-Gay. Republicans Rule!”

“My next door neighbor rang my doorbell this morning and showed me my sign, which he had kindly removed from the ground,” Cassy told blogger Egberto Willies. “We have at least 4 African American families living on this street. I’m so offended, not just because whoever did this is ignorant and misinformed and trespassed and vandalized my sign, but infinitely more for my neighbors who might have driven by and seen it.”