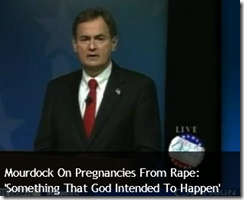 I will admit that I am extremely upset at the state of our politics. In a Democracy all sides get a chance to state their case and then have the people decide what type of society they want.

Sadly the Republican Presidential Candidate Mitt Romney has decided that instead of having Americans decide on two different paths for the country, that he would adopt much of the current policies while campaigning as he completely disregards all that he ran for. The new Right Wing Republican Party however continues to slip and make mistakes about their real agenda as Richard Murdock, the Mitt Romney endorsed Indiana Republican Senate Candidate stated his position on the terms under which women have rights to terminate a pregnancy. He actually claimed that even a fetus created under rape is “Something That God Intended To Happen”. This should appall both women and men.

While this is particularly on women’s issues, it can be replicated on civil rights issues and human rights issues (e.g., access to healthcare) as well.

Folks, it is essential that you read and not allow yourself to be fooled into voting for candidates that will harm you, your family, and our country. VOTE and encourage the people in your sphere to vote.