There is chaos in Colón, Panamá that was sparked by a newly effected Law #72. Colón is the city right next to the Northern (Caribbean) entrance to the Panamá Canal. It was a beautiful city with a central park, French façade buildings, and a very friendly people.

In the aggregate Colón is very wealthy. It is home of the first Free Zone in Latin America. It is one of the major commercial hubs in the world. There has always been three Colóns that coexisted. There were the “empresarios”, the business class, the moderately high paid folks that work for the canal, and then the average laborers of different degrees of income. Inasmuch as the wealth and income disparity was large between the three areas/groups, no one was hungry or lived below subsistence level. 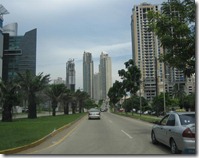 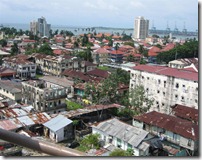 Colón’s wealth over the years has systematically been extracted in one form or the order. I found it interesting that when flying in from Houston we fly cross Colón first to then land in the outskirts of Panamá City. It is like flying over a poor country and a rich country in the span of 25 minutes.

After not being home for a while and returning 3 times in 3 years for a vacation, my father’s surgery, and then my father’s funeral I was amazed how every return came with a further deterioration of Colón proper. This occurs even as the growth rate of the country was on average north of 7%. This is the result of three specific actions; income disparity (low wages for the workers), wealth disparity (average person without the capital to innovate and self-employ in the aggregate, and wealth extraction (the removal of wealth and a tax base that can maintain the commons/public resources). There is a fourth socio-ethnocentric reason that need not be explored because it is self-evident.

This time around the Plutocracy driven government may have reached the tipping point with its last action. In the passage of Law #72, it decided to stop renting land owned by the Free Zone (the commons) and sell it for the assumed rental sum present valued for 20 years. It then claimed a percentage, less than half, would go to Colón’s coffers. Of course if the past is prologue even that was unlikely. Panamanians in Colón finally had had it. They revolted. Why would they in effect give away their land in perpetuity for the wealthy few to profit from in perpetuity? It made no sense.

This story is deep. It is where the United States of America is headed. Many look down at or scoff at countries like Panamá assuming it is just another third world country, not realizing that the same Plutocratic policies being followed in Panamá that is pilfering its people is no different than what the Romney/Ryan policies have in store for us here in the good old USA.

It must be realized that the move to privatization is a move to give ownership of the commons, our lands, our beaches, our waters to a wealthy few for short term immediate gain and to reduce the current tax rates. In other words we are exchanging our commons for a few dollars from the wealthy to pay for what they would have otherwise paid in taxes giving them an asset in exchange. We can never recover value from the assets no longer owned by the public through fees and taxes. That now becomes yet another income stream to the wealthy from the masses as we still must pay ever increasing taxes for public services.

While in Panamá the pilfering of the masses occur behind closed doors in a much less democratic fashion, if we elect Mitt Romney and Paul Ryan, we would have willfully allowed ourselves to be pilfered.

Economist Discuss The Genesis And Some Solutions

Raw Footage of Riots in Colón