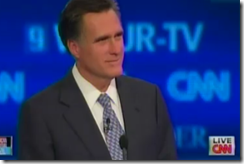 Severely Conservative Romney insinuated in the Republican Primary that FEMA should be privatized. We have not yet heard what Moderate Mitt’s façade is now saying.

It is rather silly to believe that the private sector, a sector that is dependent on deterministic profits, would be good to handle the unknown costs of the destructive power of a hurricane. To be fair, Romney said either the states or if possible the private sector should handle most of what the federal government does.

This man claims to be a business man. The reality is he is no different than the bankers and the titans of finance that want to play with our money for the gain of a few even as they beg the government for socialized relief upon the failures of their own financial misdeeds. We need only recall the crash of 2008 where they came begging the government for relief. Even the so called Romney Winter Olympic success came with an influx of capital from the Federal Government, “we the people”.
Hurricane Sandy is real. It affects real people. We need to have a very strong government that can keep our people safe both domestically (natural disasters, etc.) and militarily (from foreign powers). We must not play Right Wing Tea Party type Libertarian games. American lives are not an item on a ledger. There is a very important role for “we the people”, the government.