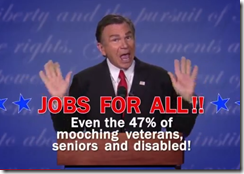 This is so funny, but how else can Romney’s statements be best satirized. Mitt Romney is likely the best and most effective liar. He makes other lying politicians look like saints. Look I know I am being harsh but simply looking at the Romney videos not from a few years ago but from a few weeks ago is probative.

What is sad is that many of us have been touting Mitt Romney as a good family man inasmuch as we know his policies are suicide for the middle class. Fact is if Americans wanted Mitt after knowing what he stood for, we would have had to respect that. Sadly what Mitt Romney is doing with the frontal lies he has been spewing is a fraud on the American citizenry.

One must wonder, if this is really a center right country that many Republicans like to call this country, how comes they consistently move left in general elections when trying to win. In effect they lie to get into office.