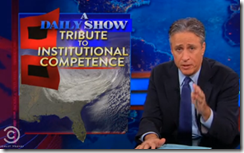 Jon Stewart in funnily interpreting government leaders response to Hurricane Sandy exposes three issues without explicitly mentioning them. That is what makes a good satirist.

Jon uses the mayor of New York to justify the necessity of taxes and the absurdity of constant tax cuts. In other words you get what you pay for.

He used the governor of New York to illustrate that the ever increasing storms now hitting all over the country is based on climate change. We ignore this at the risk of the lives of our fellow American citizens.

He used the governor of New Jersey to show the reality versus absurdity of political spin versus reality. After all, the New Jersey governor now praising the president is the same one that decimated his record and leadership characteristics at the Republican National convention.

One can only hope that in the near future most Americans will see the light. Remember to VOTE. Vote in the interest of yourself, your family, and your country.