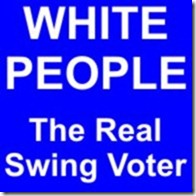 I continue to be baffled by our reporting. We continue to interpret issues on a very superficial level. The post mortem of the catastrophic loss the Republicans suffered in the 2012 election has generally been summarized as a party that is demographically out of line with the country. In other words, the Republican Party’s biggest constituency is white people in general and white males specifically.

While the statement is true it is very shortsighted. Human beings respond to one of two things, irrational fear or policies that materially affect them.

Republican policies have been provably bad for the middle class. One simply need examine a few charts to see that supply side economics have caused a substantial transfer of wealth from the middle class to the wealthy. Moreover their policies that have caused the decimation of worker unions have left the worker with no bargaining power with the employer which depress wages, savings, and with that access to wealth. Yet, no substantive coverage is given to how these policies affect the middle class in the mainstream media. Instead, “fear” stories continue to permeate the mainstream media.

Republicans have instigated a fear of a healthcare law with misrepresentations that are given plausibility inasmuch as it is orders of magnitude better than the status quo and can be shown to save lives. They have instigated fear in the formation of unions, the institution of responsible regulations, and the increase in taxes on the wealthy with the false claim they kill jobs. This has worked with a plurality of the electorate. They generally just need to play the race card, the fear of the other to close the deal.

While many believe the anti-immigrant stance would be the death knell of the Republican Party, I beg to differ. Whenever one mentions immigration they generally think Latino immigration. They treat Latinos as if they are a homogeneous race as opposed to a cluster of convenience. The reality is the same racial issues that are exhibited in America proper is also exhibited among those Latinos whether they are from Cuba, Mexico, Panama, or the Dominican Republic. The reality is 53% of Latinos are white. While the Latino population will continue to grow, that percentage is unlikely to change. As more Latinos are assimilated into the predominant American culture they will migrate to whatever the country’s racial reality is at that time.

Governor Mitt Romney presented a 5 point plan that protected the rich’s wealth and income and claims to create jobs and balance the budget that seemed plausible to many even though there was no meat on the bones of the plan. President Obama presented a “balanced approach” to job creation and budget deficit reduction that included increasing taxes on the wealthy that seemed plausible to many. The tipping point of the election seemed to be who could instill the most fear in the voters. In this election the Republicans were successful in making the wrong ones fearful.

The attack on a woman’s rights and body was not racial. The attempt at voter suppression woke up the carnal fears of those who had been denied that right for centuries. The attack on immigrants was the attack on anyone who recently came here or empathized with friends and relatives who wanted to be here.

For those who continue to think that Democrats can somehow get a baked in majority or lasting political power with this “new reality”, they better think twice. Just like the American populace is diverse with liberal and conservative values, so is the Latino population. When the elements of fear are removed from them they will exhibit the diverse behavior and voting preferences of the typical American. Latinos are generally more religious and conservative on issues like abortion which makes them easy pickups for Republicans when their culturally ignorant members die out or when the economy becomes robust.

Democrats need to take this time and understand who the real swing voters are. White people will be the only swing voter in America for the foreseeable future. As such it is in the best interest of Democrats that as Republicans start fighting for Latinos (likely the white ones), Democrats start fighting to bring more white men (and women) into their ranks. A party perceived to be the party of minorities is not viable.