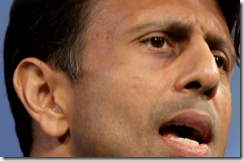 Jindal has some nerve. He wants to stop dumbing down his Republican party. If he really wanted a fact based party he would start by stating that supply side economics is a proven failure. The charts correlate perfectly showing that those policies have transferred wealth upward, rewarded capital, and penalized work and innovation.

Jindal want the party to start respecting the intelligence of the American citizenry. Yet, they are using their media industrial complex to misinform. After all they are the ones that promoted that climate change is not real, a woman’s body can conceive appropriately by being able to discern legitimate rapes, job creators are the wealthy, tax increases on the rich depresses the economy, and many other fallacies.

To undo the misinformation would first begin by the GOP stating they willfully misled the middle class for political and financial gain for the wealthy. Unfortunately that admission would justifiably destroy the party. I would be for the destruction of the party along with the rebirth of an honest Conservative alternative that would be an appropriate and necessary backstop to any excesses of Liberals and Progressive and vice versa.

Bobby Jindal: GOP Should 'Stop Being The Stupid Party'

Louisiana Governor Bobby Jindal hurled harsh criticism at his own party after the GOP was blindsided in the 2012 elections, telling Republicans to end "dumbed-down conservatism" by putting a stop to "offensive, bizarre" comments.

“It is no secret we had a number of Republicans damage our brand this year with offensive, bizarre comments -- enough of that,” Jindal told Politico. “It’s not going to be the last time anyone says something stupid within our party, but it can’t be tolerated within our party. We’ve also had enough of this dumbed-down conservatism. We need to stop being simplistic, we need to trust the intelligence of the American people and we need to stop insulting the intelligence of the voters.”

Jindal told Politico Republicans should “stop being the stupid party” by working to embrace a larger group of constituents rather than becoming the party of "big anything."

Bobby Jindal: GOP Should 'Stop Being The Stupid Party'