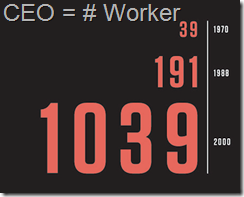 The media spotlight is on corporate CEOs this week, whether it’s the fiscal showdown, Black Friday protests, or the mismanagement of Hostess, the maker of Twinkies and Ho-Hos. Here’s how to expose the common thread in their actions — and stand up for our values.

Of course corporate CEOs are in it for the money — looking out for the American people is someone else’s job.It’s common sense — of course businesses want to succeed financially and look out for their bottom line. When business and government leaders take the long view of the economy’s best interests, we get companies that create good jobs with decent benefits and Patriotic Millionaires who advocate for shared prosperity that benefits us all.

When they’re just looking out for their own short-term interests, they get soaring CEO pay and massive tax breaks — while we get layoffs and low-wage dead-end jobs. The Twinkies executives padded their own pockets and forced their workers to take less pay. This Friday, Walmart workers who’ve been working harder and harder for less and less are protesting the same thing.

Now the corporate CEOs whose jobs are to make money for themselves and their investors are pushing for cuts to Social Security, Medicare, and Medicaid — and more tax cuts for themselves. There’s a reason the American people just rejected a self-interested CEO for president. We need leaders who look out for all of us and understand that ultimately we’re all in it together.

ATTACK: “Obamacare is driving up the price of my pizza.”
RESPONSE:

WHAT YOU NEED TO KNOW