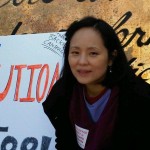 I was browsing Huffington Post and just happen to come across Annabel Park’s most recent blog post “The Real Culprits of the Israeli-Palestinian Conflict”. Annabel Park is the co-Founder of Coffee Party USA. Included in her blog is a video with a young man who seems to be knowledgeable of the genesis of the conflict in the region.

I decided to cross blog Annabel’s post not because of my personal detailed knowledge of the Israeli-Palestinian conflict but because of what she did as a private citizen. She decided to engage directly with people in the region. She used our modern social networking tools to form people to people contacts. She established relationships.

Why is this important? Governments that are enemies today are friends tomorrow. Citizens are misled to hate, fight, shed blood, and die as many in control of governments play the citizenry like puppets. As people engage one on one, one on many, and many on one within towns, states, and countries, the likelihood of conflict will eventually diminish because our knowledge of others is no longer filtered through the lens of a potentially biased or evil government.

What I think however is most important is that today, now, anyone who feels a passion to do something can. Are you concerned about the Fiscal Cliff? Form a Facebook group and create a sphere where you can influence a local politician. Find a friend and picket for a couple of hours at a politician’s office, take pictures, post it, and encourage others to do it.

The Real Culprits of the Israeli-Palestinian Conflict

To me, the blockade of Palestinian territories has been inhumane and unjust. My heart aches for the suffering of the Palestinians in those territories. To be honest, I’ve cried many times for their plight and reading about their circumstances puts me in a very dark place

However, I also have compassion for anyone who lives with fear that their lives and the lives of their loved ones are in jeopardy — especially when there is so much in their personal and families’ histories to warrant fear. I understand the kind of fear that lives in your DNA and it can’t be shaken so easily even if it ends up destroying you in the end. It is not mere propaganda that there are powerful people with access to weapons who want to see Israel destroyed and some, I’m sure, would like to harm the Jewish people.

I’m afraid that the Israelis and Palestinians are in a suicide pact at this point because of fear, mistrust and hatred. It appears that there just isn’t enough support for the one-state or two-state solutions. I’m afraid the next implosion may engulf the region and the world into a global war with the U.S. and Iran getting directly involved.

The culprits in the story to me are not either of the two sides, but the former European empires (Great Britain, France, and Russia) that divided the Middle East to suit their needs during the fall of the Ottoman Empire (1916 Sykes-Picot Agreement). It seems that this agreement made in secret by European colonialists has cast a Gothic shadow over the the entire region with a map that just does not fit with the needs and lives of the people who live there.

Because it is human nature to respond to conflict and violence with more conflict and violence, how to break this cycle is the biggest and the hardest political, moral and personal challenge facing our time.
We the People must organize and stand up together to the people who only use the language of war and violence to resolve conflicts. We must choose between militarism and humanism. Militarism is founded in our fear of each other. Humanism is founded in our faith in each other. I choose faith. I choose humanity.

Annabel Park: The Real Culprits of the Israeli-Palestinian Conflict