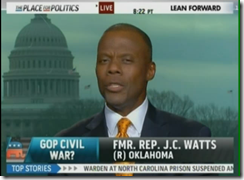 Today former House Republican Conference Chair JC Watts was interviewed on MSNBC. There has been speculation that he may be interested in running to be the RNC chairman.

Interesting enough a few days ago current Republican Chairman Reince Priebus announced that he had already locked up the necessary votes to be reelected. At that time many wondered out loud and on twitter how Mr. Priebus could remain chairman given that under his leadership Mitt Romney Loss the race for the presidency, seats were lost in a Senate in an election favorable to the GOP, seats were lost in the House in an election favorable to the GOP, and more people voted for Democrats in the House than for Republicans (even as gerrymandering allowed them to keep the majority). This is in complete contrast with what happened with Michael Steele, the previous chairman, who had a very successful 2010 election, an election the President correctly called the drubbing of Democrats a shellacking. Michael Steele was summarily “fired”.

JC Watts excoriated RNC Chairman Reince Priebus in his interview below. He laid out exactly what would happen to anyone losing as badly as Priebus did. He said they would be fired. He also seems to come to the realization that the Republican Party still has not learned the lessons of the election. They continue to operate as if they do not need a fundamental change that includes outreach to the entire quilt that is America.

The Republican Party really does not get it. Immediately after it lost the women vote, the Latino vote, the Black vote, and every other ethnic vote, all major House leadership positions were giving to white men. The Party that hates Affirmative Action, in its actions presents the case why it is still needed today.

The Republican Party leadership is not stupid. They can read the tea leaves like anyone else. One must then wonder why they continue to make these “missteps”. The answer is obvious if you look deep enough. The Republican Party still have remnant beliefs that some voters are more important than others. White males with means are more important than minorities, women, and the underclass as implied by former congressman from Virginia Tom Davis on MSNBC. They continue to stress now that it is not “one man one vote” but that America is a representative Republic. They want to return to the appointment of senators by state legislatures by overturning the 17th amendment that placed that election in the hands of the people.

Liberals must beware. All these Tea Party issues that may seem too extreme to be taken seriously must be taken seriously. Republicans will continue their attempt to reinstitute the original constitution where most residents of this land were powerless. In that scenario, they do not need to cater to a changing demographic.