Susan Rice has withdrawn her name from consideration to be Secretary of State. MSNBC reports that Mrs. Rice, a Stanford graduate and a Rhodes Scholar submitted her letter to the president today.

Mrs. Rice states in her letter.

The position of Secretary of State should never be politicized. As someone who grew up in an era of comparative bipartisanship and as a sitting U.S. national security official who has served in two U.S. Administrations, I am saddened that we have reached this point, even before you have decided whom to nominate. We cannot afford such an irresponsible distraction from the most pressing issues facing the American people.

Sadly for Mrs. Rice, this is a different era. Qualifications no longer matters on one side of the isle. Destructive politics now reigns. When the opposing party can simply threaten a filibuster on a made up scandal created by a so called news network that operates as their personal propaganda wing, it speaks poorly for the country’s future if this type of politics is not mitigated in the near future.

Mrs. Rice’s failure according to Senator McCain and a small sample of Republican Senators is that she misled the American public on Network TV on the embassy attacks in Benghazi; this even as she was given the specific talking points to use. This is more likely a vendetta on Susan Rice’s description of Senator McCain during the 2008 election where she referred to his policies as “reckless” and his trip to Iraq as “strolling around in a flak jacket”.

Susan Rice in her letter shows she is a self-less patriot as she puts country first. She writes,

However, if nominated, I am now convinced that the confirmation process would be lengthy, disruptive and costly - to you and to our most pressing national and international priorities. That trade-off is simply not worth it to our country. It is far more important that we devote precious legislative hours and energy to enacting your core goals, including comprehensive immigration reform, balanced deficit reduction, job creation, and maintaining a robust national defense and effective U.S. global leadership. Therefore, I respectfully request that you no longer consider my candidacy at this time.

While there was some criticism regarding her personality and investments she holds in Canadian oil, a potential conflict of interest, the politicization was primarily from the right and primarily on Benghazi.

The disruptive Right has extracted their pound of flesh from this re-elected president. This short term victory will likely harden the president’s resolve to really fight for middle class issues. They have drawn blood from a close friend and a national hero. 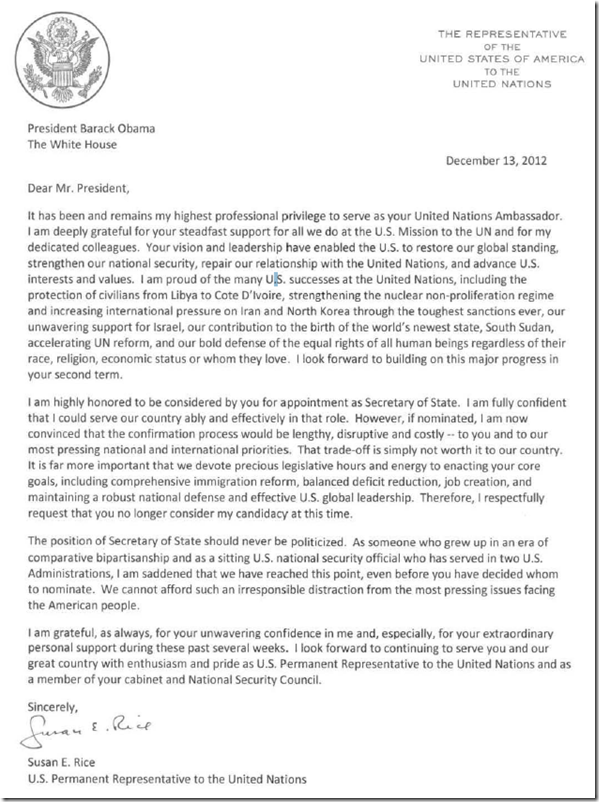