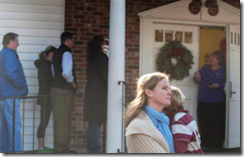 The suspect in one of the the deadliest school shootings in history has been identified as Adam Lanza, authorities said Friday.

According to police, Lanza, 24, is suspected of killing 27 people — 8 adults and 18 children — at Sandy Hook Elementary School in Newtown, Conn.

The shooter was killed during the rampage and several others were injured.
The identities of the shooting victims has not yet been released.

The gunman was wearing dark clothing, a mask, a bulletproof vest, and was carrying four guns. A cause and manner of death is pending, police said.

Police continue to investigate if there was a second shooter involved.

Unconfirmed reports say that principal Dawn Hochsprung and a school psychologist were killed, according to a parent who claimed to witness part of the attack, CNN reported.

The masked gunman entered the school administration office around 9:40 a.m., about 30 minutes after the school day began. The first 911 call was received by police one minute later.

Investigators said the gunman fired his weapon at least 100 times.

Students inside the building were escorted out in a single-file line. There are about 626 students enrolled in kindergarten through fourth grade classes at Sandy Hook Elementary, with another 46 faculty members, Newtown Patch reported.

Authorities have not commented on whether the deadly encounter was captured on video surveillance.