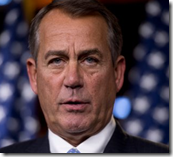 The Plan B bill that Speaker Boehner attempted to get passed in the house was an interesting document. Inasmuch as it purported to raise the income level that would receive the tax increase, the totality of the plan ensured that the wealthy would get a tax decrease overall, and that the poor and middle class would either pay more taxes, lose benefits, or both.

In short, while the bill raises $300 billion from high-income households, it is 1/3 the amount Boehner previously offered. Worse, it is a $50,000 tax cut for millionaires since the first million dollars of all American taxpayers would get the tax cut.

Who will benefit the most from Speaker Boehner’s proposal? Table 1 illustrates.

Sadly, Plan B does not protect those affected by a week recovery. It would cut off benefits from 2 million workers searching for jobs. It will cut Medicare reimbursements to Doctors by 27%, a fix normally done every year.

The non-defense portions of the sequester, an 8% cut, stays in effect. This would remove 100,000 children from Head Start access. 10,000 special education teachers and related staff would lose their jobs. 700,000 women and children would lose nutrition assistance.

Plan B would also reduce many small business and clean energy incentives. It does not extend the 50% bonus depreciation to support investment growth.

Speaker Boehner threw a new bone to his base in his attempt to pass Plan B. He would restore defense cuts coming from sequestration. To pay for it, he would cut mortgage relief, food stamps, EITC, & obesity protection.

Plan B failed to pass as it was unable to get support for Boehner’s own caucus. Ensuring that America’s Defense Industrial Complex remains fed was not enough. Increasing the tax cuts for the wealthy was not enough. Ensuring that the poor and the middle class paid more taxes and absorbed more cuts were not enough. Absent no tax increases on mostly the wealthy, absent no cuts in defense, and absent the decimation of the social safety net, the Right Wing Republican Tea Party caucus prefers putting the country at financial risk. One must wonder what ever happened to the patriotism they claim.